The U.S. Army's New Artillery Can Kill from 40 Miles Away 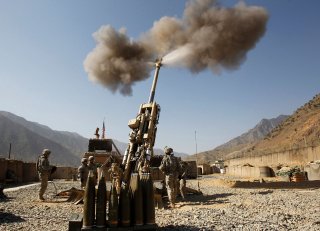 What if an attacking U.S. Army ground force knew its ultra-long-range artillery had already decimated enemy supply lines and troop fortifications in advance of their move to take out the enemy?

Moreover, what if all of that bombardment had been done from a safer standoff range? It is not hard to imagine that such a U.S. force could maneuver with more confidence and more clearly-defined objectives by virtue of having already achieved certain essential battle aims.

With this kind of scenario in mind, the Army has employed engineering adjustments to increase their 155m artillery power and literally “double” their range out to as far as 70km.

The program, called Extended Range Cannon Artillery (ERCA), has been on the fast-track for quite some time, as Army developers move quickly to develop and test a new, more lethal and survivable 155m artillery weapon.

Army Futures Command has already demonstrated ERCA’s ability to hit ranges out to 62km, all while sustaining the requisite amount of precision. Typical state-of-the-art artillery, such as an M777 Howitzer firing a GPS-guided Excalibur round, maxes out at about 30 to 40km. By hitting more than twice the distance, ERCA enables an entirely new sphere of standoff range, meeting the tactical and strategic aims of the program. The goal, as one senior Army official described it to me, is to simply “out-range” the enemy.

“ERCA fires a 58 Caliber, which is about 30-ft long. It has a bigger chamber which allows for a different propellant and different breech. Muzzle velocity is generated through the length of the tube,” Brigadier General John Rafferty, Director, Long Range Precision Fires Cross-Functional Teams, Army Futures Command, told TNI in an interview earlier this year.

Rafferty further explained that behind the projectile is a super-charged propellant and a sliding block breech engineered to accommodate the technical challenges of firing a longer-range weapon.

“A robust hunk of metal seals the back of the cannon. The explosive train is ignited electronically and the larger chamber coupled with the longer gun tube allows for much greater muzzle velocity as it exits the cannon,” he said.

ERCA fires the same compliment of 155m ammunition as existing systems, a dynamic that enables the longer-range weapons to leverage promising new innovations in the areas of target precision and guidance technology. For example, the Army is now working with Excalibur-maker Raytheon on several new, course-correcting rounds able to adjust in flight to hit otherwise inaccessible targets. One such program is referred to as a “shaped trajectory,” a round programmed to shift course and hit targets under bridges or on the backside of a mountain.

“We do have some adversaries who use reverse slope protection that challenges normal artillery because the descending portion of the trajectory can be masked by that reverse slope. A shaped trajectory is a different projectile used in limited numbers. In rugged terrain, it allows a modified trajectory that can enable new effects against targets. We are working with industry to see what is possible,” Rafferty said.

A longer range, more powerful cannon, Rafferty explained, has to be engineered with specific technical mechanisms to disperse the additional “blast overpressure” caused by a longer tube.

“A muzzle brake at the end of the cannon helps with recoil by dispersing the fumes and blast. It helps direct the blast overpressure. When the round is locked in place, the breech rotates into a locked position, then the back end of the breech is sealed. On ERCA, we have a sliding block breech, which is like a tank gun. It is a block of steel that slides up, which seals the launch tubes and allows for the generation of the chamber pressure. Otherwise, the round would come out the back because of the least resistance. The sliding block breech is more robust and can handle a greater explosion. The higher the chamber pressure, the bigger the explosions,” he told TNI.