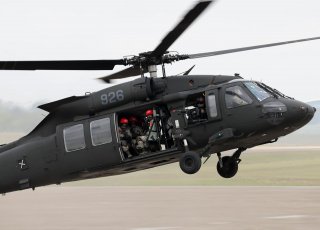 The Army’s new Future Long Range Assault Aircraft prototypes will fly in 2025 as part of the service’s ambitious and so-far promising effort to accelerate the development of its Black Hawk replacement by as much as four years.

The new helicopter was originally slated to emerge in 2034 and has now been moved up to 2030 due to rapid progress, technological advances and the Army’s need for a new platform to rival modern threats.

“We are seeing a four year acceleration due to industry investment. We are pleased with their work and want to maintain that momentum,” Brigadier General Walter Rugen, Director, Future Vertical Lift Cross-Functional Team, explained to TNI in an interview.

The program, which has now been underway for many years, began with industry work on early Joint Multi-Role Technology Demonstrator helicopters intended to explore the “art of the possible” and push the envelope of technical possibility. Some of the primary advantages sought after by the Army include massively improved speed, range, weapons, sensing and operational combat capacity. This includes an ability to conduct missions with a combat radius of more than 400km, operate in what’s called “high-hot” conditions of 95-degrees F and 6,000 ft, and reach speeds as high as 280mph.

“We want the ability to operate the aircraft, conduct near-peer air assaults and show up in places where the enemy does not expect us,” Rugen said.

An expanded combat radius will enable the aircraft to operate more easily on a single mission without needing Forward Arming and Refueling Points, or FARPs.

Both models are considered compound configurations engineered to blend and optimize a range of key variables such as maneuverability, speed, command and control systems and a crucial need to “hover” over combat areas when needed.

A key element of the acceleration, which has been successful so far, is what Rugen called an ability to “upgrade at the speed of technology.” This means that software and hardware configurations are being engineered to accommodate new weapons, sensors, computer systems and engine technologies.

Rugen explained that Army weapons developers are still working to sharpen, adjust and refine some requirements for the aircraft which is designed to “grow as threats grow.”

“We finished up an AOA (Analysis of Alternatives) and an independent technology readiness assessment,” Rugen said.

Kris Osborn is the defense editor for the National Interest. Osborn previously served at the Pentagon as a Highly Qualified Expert with the Office of the Assistant Secretary of the Army—Acquisition, Logistics & Technology. Osborn has also worked as an anchor and on-air military specialist at national TV networks. He has appeared as a guest military expert on Fox News, MSNBC, The Military Channel, and The History Channel. He also has a Masters Degree in Comparative Literature from Columbia University. This article appeared earlier this year.