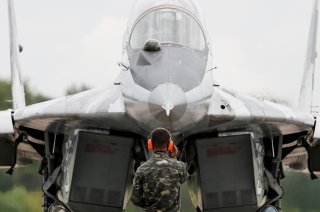 While the U.S. Department of Defense continues to fast-track weapons and supplies to Ukrainian defenders fighting in the southern and eastern parts of the country, U.S. and allied supporters of Ukraine are also increasingly thinking about the long-term effort to “sustain” Ukraine’s war effort.

A key part of this involves support for Ukraine’s air force, in large measure because the Russians have still been “unable” to achieve air superiority, something which is quite surprising given the massive disparity in fighter jets between Russia and Ukraine.

“[T]here is work being done here at the Pentagon and elsewhere out in Europe, at EUCOM [United States European Command] and elsewhere, to help work with the Ukrainians to identify their kind of medium to long term requirements. So think of things that aren't measured in days and weeks but measured in months and a handful of years,” Colin Kahl, the U.S. undersecretary of defense for policy, told reporters on August 8 at the Pentagon, according to a transcript of his remarks.

Of particular interest was Kahl’s note that, in time, there may be an opportunity for the West to send fighter jets to Ukraine.

“...I think that there are real questions about what would be most useful in terms of assisting the Ukrainian Air Force and improving its capabilities. It's not inconceivable that down the road, Western aircraft could be part of the mix on that, but the final analysis has not been done. I will say, though, in the near term, we've been doing lots of things to make Ukraine's existing Air Force stay in the air and be more capable,” Kahl said.

For example, Kahl explained that despite the widespread focus on Washington’s unwillingness to shepherd Polish MiG-29 fighters to Ukraine earlier this year, the Defense Department has continued to act in support of Ukraine’s air force.

“[A] lot was made about the MiG-29 issue several months ago. Not very much has been noticed about the sheer amount of spare parts and other things that we've done to help them actually put more of their own MiG-29s in the air and keep those that are in the air flying for a longer period of time,” Kahl said.

The Pentagon has also included a large number of anti-radiation missiles that can be fired from Ukrainian aircraft to destroy Russian radars or “jam” their communication systems.

This development appears to indicate that U.S. and allied supporters of Ukraine are perhaps more inclined to think Ukraine might ultimately prevail in stopping or even destroying Russia’s advances. Clearly, Ukrainian air defenses are having an impact on whatever fighting is going on in the air. Also, if Russia is still unable to achieve air superiority, something that could completely change the tactical situation on the ground, is it even reasonable to envision a scenario wherein Ukraine is able to take control of the skies if fortified by large numbers of fighter jets? It seems, given Kahl’s comments, there may be some emerging thinking along these lines. But if that does not come to fruition, there is at least a growing consensus that Ukraine may succeed in continuing to shut down Russian air attacks.