The U.S. Ignores Human Rights Abuses in Slovakia at Its Own Peril 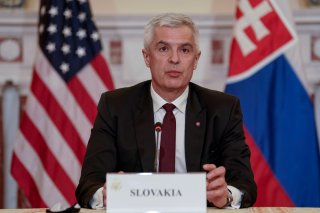 On April 12, the State Department published its annual human rights country reports. While certain countries and issues are being strictly scrutinized, serious human rights violations in the heart of Europe are consistently ignored. This goes against America’s own interests and undermines transatlantic unity at a critical time.

Human rights are at the heart of the values-based alliance the United States seeks to lead in the 21st century. Since the Cold War, the State Department’s human rights country reports have been an important foreign policy tool used to draw attention to government practices that undermine democratic practices. Sadly, this year’s report, yet again, stays silent on an important problem in Slovakia, a NATO country.

In today’s otherwise progressive Slovakia, World War II-era laws, called the Beneš Decrees, are still applied to confiscate the private property of individuals purely on an ethnic basis, and yet, there is no word about them in the report.

The Beneš Decrees claimed collective responsibility of ethnic Germans and Hungarians after World War II, and persons of German and Hungarian ethnicity were deprived of their citizenship, fundamental rights, and private property. In some cases, however, seizures could not take place for procedural reasons. The Slovak state is now “correcting” these omissions and seizing the lands without compensation for those who inherited their property from their ethnic German or Hungarian ancestors.

This happened to Miklós Bosits in 2009, when the Slovak state forest company wanted to confiscate Mr. Bosits’ lands, which the state claims should have been confiscated in 1946 solely on the basis that his grandparents were ethnic Hungarians. In 2020, the European Court of Human Rights, in the Bosits v. Slovakia case, acknowledged the contemporary application of the Beneš Decrees as an existing legal practice.

There are hundreds of similar cases. In recent years, the Slovak Land Fund has taken possession of hundreds of hectares of land, worth millions of Euros, through the retroactive application of the Beneš Decrees. Since 2019, a total of 600 proposals have been submitted claiming ownership of properties that should have been confiscated between 1945 and 1948 from the ancestors of the current landowners. The Slovak Land Fund, acting ex officio, is constantly searching for unenforced confiscation orders in archives so it can acquire those lands.

According to Harvard Law graduate and international human rights lawyer János Fiala-Butora, it is as if the state had not repealed Nazi-era laws after World War II and is now confiscating the lands of Jewish people, claiming that a confiscation decision made in 1942 was unenforced due to procedural errors and now the state is “correcting” these omissions.

The ghosts of the 1940s are still alive in Slovakia, but the 2021 human rights report on Slovakia remains silent about this practice. The document addresses property seizures, but only those regarding the restitution of property seized during the Communist and Nazi era. How can such serious human rights violations be completely missed by the U.S. State Department?

Since the early 1980s, the reports have been repeatedly criticized for being thin on substance, particularly with respect to U.S. allies. The use of biased sources when drafting the reports is also a significant issue. The State Department’s  Bureau of Democracy, Human Rights, and Labor coordinates the drafting of the human rights reports, while inputs are provided by local U.S. embassies. The sources for the reports are wide-ranging and may include NGOs, press reports, academic studies, and governments.

While the contribution of these outside sources makes sense, the exclusive and uncritical reliance on NGOs, which often receive State Department funding themselves, jeopardizes the objectivity of the country reviews. Many NGOs, functioning as advocacy organizations, are explaining the perspectives of only one side rather than providing a fair picture. Even in countries where well-established advocacy organizations provide detailed analyses on human rights violations, the abuses experienced by certain marginalized groups in society tend to go unreported.

This is specifically important in Slovakia. Here, the ethnic Hungarian minority constitutes roughly 8 percent of the country’s population. However, Hungarian human rights organizations are not well-organized in the country. As Nicole Nemeth recently pointed out in a far-ranging review of the State Department’s reports, the lack of professional advocacy cannot be a legitimate reason for the United States to ignore serious human rights violations. Still, the violations of the rights of ethnic Hungarians in Slovakia were barely addressed in the country reports on Slovakia between 2016 and 2020—much like reports about human rights in Eastern Europe between 2011 and 2015.

Although the report itself acknowledges that the ethnic Hungarian minority is the largest minority in the country, the State Department does not address the challenges faced by the Hungarian community at all. In the chapter on ethnic violence and discrimination, the report deals only with the issues of the Roma and completely disregards issues affecting other ethnic minorities.

Ignoring the retroactive application of the Beneš Decrees—and thus, the confiscation of the private property of individuals purely on an ethnic basis—is not only an ethnic discrimination issue. It is also an outrageous violation of the core human rights and values that are cherished by the United States: the rights to human dignity and private property.

If the United States wants to maintain its leading role in the realm of international human rights, the State Department must improve its work on its annual human rights reporting. It must involve stakeholders it has traditionally ignored and provide a fairer and more balanced approach to human rights. Otherwise, America’s official reports on human rights practices will only be viewed as a political tool to pressure certain countries whose politics are not favored by Washington.

Dr. Balázs Tárnok is a Hungarian jurist from Slovakia and research fellow at the Europe Strategy Research Institute, Ludovika-University of Public Service, Budapest. In 2021, he was Hungary Foundation’s Visiting Research Fellow at the Kellogg Institute for International Studies, University of Notre Dame. You can follow him on Twitter @TarnokB