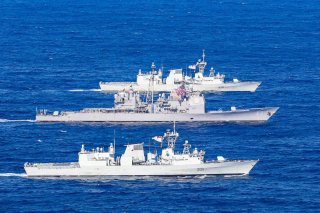 The U.S. Navy’s Ronald Reagan Carrier Strike Group conducted a joint, integrated operation with Japanese and Canadian allies in the Western Pacific. The exercises are designed to support a free and open Pacific region.

“Conducting operations with both traditional carrier strike group units and expeditionary strike group units gives us the chance to put a high-performing team together to execute and enhance command and control of integrated forces in a complex maritime environment,” said Rear Adm. Derek Trinque, commander of Task Force 76/3 in a U.S. Pacific Fleet statement. “With the talents of our ships and our allied ships, combined with the air power skills of the carrier strike group we become a more lethal and flexible force than either of us could be alone.”

“Being able to execute these operations together helps us stay postured for future maritime challenges, serving as a foundation for the combat credibility of our forward-deployed naval forces,” said Rear Adm. Michael Donnelly, commander of Carrier Strike Group 5.

The Ronald Reagan Carrier Strike Group involves the USS Ronald Reagan, the USS Chancellorsville, a cruiser, the USS Higgins, a destroyer, and several other surface ships. The American ships were joined by Canadian frigates and a Japanese Self-Defense Forces destroyer.

“The Ronald Reagan Strike Group has relished this opportunity to hone our skills alongside the New Orleans team and integrate expeditionary warfare with carrier air power. Integrated naval operations in the Western Pacific demonstrates U.S. commitment to our regional allies and partners, support for international stability and security, and the ability to rapidly respond to any challenge.”

At the forefront of this joint exercise is China's potential threat to a free and open Indo-Pacific region, with Europe as a backdrop. The flames of war are still alight in Ukraine and the ongoing Russian invasion has shown that the rules-based post-World War II order has been upended. Moreover, China’s repeated references to reunification with Taiwan—by force if necessary—have the Pacific region on edge.

“The Self-Defense Fleet has been working together with the U.S. Navy from day to day to maintain and strengthen its ability to bilaterally respond to various contingencies and work closely with our ally to realize a ‘Free and Open Indo-Pacific,’” the Commanding Officer of JS KIRISAME, Cmdr. Sakata Atsushi said in a separate statement issued by the Japanese Self-Defense Fleet. “The Self-Defense Fleet also upholds a law-based maritime order, addresses global challenges, and contributes to peace and stability in the Indo-Pacific region.”