U.S.-Made Weapons For Sale in Afghanistan 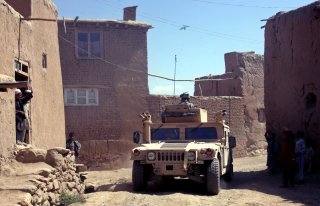 For centuries Afghanistan has been home to a "cottage industry" that mass-produced highly accurate and functional copies of popular firearms of the day. During the nineteenth century, it wasn't uncommon to go to the Khyber Pass region near the border with Pakistan to find "knockoffs" of the British Brown Bess musket and later the Martini-Henry rifle.

Working on dirt floors, the Afghan artisans and self-taught gunsmiths used whatever metal they could find, and with rudimentary tools created excellent counterfeit versions of the popular weapons. In the twentieth century, British Lee Enfields and later Soviet AK-47s and SKS rifles were also copied. Earlier this year, it seemed even excellent copies of the American-made M4 Carbine were being produced.

However, it seems that the United States may have successfully found a way of stopping the counterfeiters and weapons forgers. By leaving vast quantities of weapons behind during the August withdrawal of forces from Afghanistan it now seems that countless quantities of American-made weapons are now being found in small shops throughout the Central Asian country.

The New York Times reported this week that dozens of Afghans have set up weapons shops in the country's south, selling American-made pistols, rifles, grenades, binoculars, and night-vision goggles.

"The equipment was originally provided to the Afghan security forces under a U.S. training and assistance program that cost American taxpayers more than $83 billion through two decades of war," the paper reported.

"Since 2005, the U.S. military has provided the Afghan national defense and security forces with many thousands of small arms, ranging from pistols to medium machine guns," Maj. Rob Lodewick, a Department of Defense (DoD) spokesman, said in a statement to the Times.

It was just last week however in congressional testimony, that Defense Secretary Lloyd J. Austin said that the "more sophisticated weaponry" used by American forces in Afghanistan had been removed in August. Additionally, advanced weaponry provided to the Afghan security forces, such as helicopters and airplanes, was disabled before the Americans left.

Arming the Taliban and Other Groups

During the insurgency, the Taliban often acquired its weapons on the black market, and eagerly sought out the American-supplied equipment. Now that the Taliban is in control, small shops are openly selling the weapons, while some savvy merchants are now smuggling the abandoned weapons into Pakistan, where the demand is very strong.

Of course, it isn't just the guns and military hardware that is now for sale. In local markets, everything from construction material to metal trays that were salvaged from former Afghan military bases is being offered for sale. Then there are the Humvees, armored personnel carriers (APCs), and at least one functioning Black Hawk helicopter offered for sale.

It is likely that some of these weapons will find their way to militias as well as terrorist groups. Some may have ties to the Taliban, while others could use the caches of firearms and equipment in the potentially impending civil war.

The biggest losers could end up being the artisans who had to copy western firearms. Now instead, there seems to be more than enough going around. Clearly, firearms sales aren't just booming in America; in Afghanistan, it might be the only thing driving the local economy.