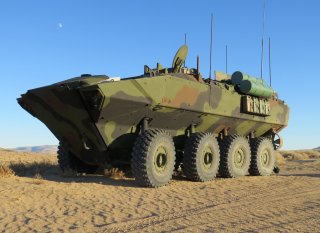 An official Marine Corps statement specified that the move was “out of an abundance of caution.” The Corps’ Twitter post also stated that “realistic training is a vital component of readiness, and the Marine Corps is committed to ensuring Marines train under the safest conditions possible; this includes ensuring the functionality of vehicles and equipment.”

In 2020, a fatal accident involving the Corps’ Vietnam-era Assault Amphibious Vehicle (AAV) killed eight Marines and a Sailor during a summer training exercise at sea. It was the deadliest AAV incident in the United States Marine Corps history and likely a reason why the Corps is taking Amphibious Combat Vehicle safety so seriously.

After a training raid, the AAV reported taking on water en route to an amphibious transport dock. Shortly thereafter, the AAV sank with a total of fifteen Marines and one Sailor aboard. Seven Marines and a Sailor did not manage to escape from the vehicle after it sank, and the AAV was only 1,500 meters from shore.

The Marine Corps received their new ACVs in 2020 and slowly began phasing out the AAV, which by 2020 had been in service for nearly half a century. However, the road to fielding an AAV replacement has been rocky.

An earlier AAV replacement called the Expeditionary Fighting Vehicle (EFV) attempted to combine all of the Corps’ desires onto one platform: the EFV sported a powerful 30 mm cannon and was incredibly fast on water thanks to a retractable bow flap that gave the EFV speedboat-like speeds. In addition, twin water jets at the EFV’s rear powered the vehicle while in the water, and retractable flaps covered the EFV’s tracks in the water, giving it a very smooth underwater profile.

Despite high hopes and high performance while on land or maneuvering at sea, the EFV was plagued with reliability problems, and breakdowns were common. Moreover, the Marine Corps’ focus on land warfare after 9/11, coupled with the program’s ballooning cost, ultimately led the Corps to ax the program.

Though in USMC service, the new ACV is far from perfect. One Marine Corps evaluation called for several modifications to the vehicle, including a modified troop commander station to aid vehicle ingress, improved vehicle recovery capabilities should the ACV need support, and improved protection for the vehicle’s suspension and steering from debris encountered on the battlefield, concertina wire in particular. So while the ACV is already in service, the Corps still has some work to do on the vehicle to ensure battlefield effectiveness and safety.