The U.S. Marine Corps Is Making Big Changes (Thanks to Threats from Russia and China) 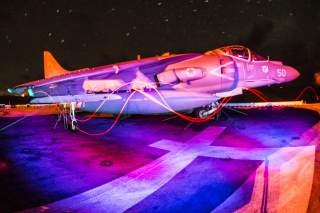 It’s no secret that the U.S. Marine Corps is changing in order to better prepare for major warfare with China and Russia. Gen. David Berger, the Marine commandant, is overseeing several studies that could result in the Corps cutting some units and adding others and, in the process, radically changing how and why it functions.

Instead of storming enemy beaches from specialized vessels and fighting infantry battles ashore, the Corps would deploy from collections of cheaper support ships in order to establish airfield for F-35 stealth fighters and fire bases for anti-ship rocket batteries.

This new Expeditionary Advanced Base Operations concept could require fewer than the 38 U.S. Navy amphibious ships than the Pentagon currently plans on building.

But there’s another, arguably more controversial force that the Marines should consider cutting, Walker Mills argued at the Center for International Maritime Security. The Corps’ 24 infantry battalions with their 22,000 riflemen. “There is not a clear role for the infantry in [Expeditionary Advanced Base Operations],” Mills wrote.

One unit in particular should be on the chopping block, Mills recommended. “Currently the Marine Corps deploys infantry battalions to Okinawa, Japan on a rotational basis as part of the Unit Deployment Program.”

While in Japan, the battalions fall under 4th Marine Regiment, which has a permanent headquarters in Okinawa. The 31st Marine Expeditionary Unit, while not part of the Unit Deployment Program, contributes another infantry battalion to Okinawa for several months per year.

While deployed to Okinawa these battalions train much like they would back at their home stations in the United States, albeit with fewer resources and less support. They do have expanded opportunities for training with local Japanese Defense Force units and other regional partners.

They do not have the doctrine or the training to defend against an amphibious landing, and because of training restrictions in Okinawa they are unable to train and practice with their heaviest weapons. They are certainly a demonstration of U.S. commitment to the region, but cannot offer relevant capabilities that would be useful in a conflict scenario.

If the Marine Corps were to stand down the 4th Marine Regiment or shift it to the reserve component, while simultaneously ending the Unit Deployment Program in Okinawa it would give senior leaders significant room in the existing force structure to create whole new units – several thousand Marines, without increasing operational demands on remaining infantry units.

It would also free up infrastructure in Japan and the United States to support these new units and capabilities.

Mills proposed other forces the Marines could afford to cut. “The Marine Corps currently maintains two active-duty and one reserve tank battalion with M-1A1 Abrams main battle tanks,” he wrote. “Tanks can be extremely valuable in combat but have large sustainment footprints and are more difficult to deploy from landing craft and aircraft because of their extreme weight. They could be transferred to the reserves or divested.”

Tube artillery likewise could go away. “The Marine Corps currently has only one active duty HIMARS or rocket artillery unit (though another is planned),” Mills pointed out.

“All of the other artillery units are cannon-based and employ the M-777 155-millimeter howitzer. These howitzers are advantageous because they are light enough to be transported by helicopter but would be relatively ineffective against ships and have only a fraction of the range of anti-ship missiles. If the Marine Corps is serious about investing in anti-ship missiles, divesting from units of cannon-based artillery would be one method to adjust force structure toward sea control.”

The bottom line is that, if the Marine Corps needs to change, it should have the courage to change in meaningful ways, Mills wrote. “If littoral operations and EABO are going to become the main effort for the Marine Corps, as appears to be the case, the Marine Corps will have to accept risk in parts of the organization in order to resource growth areas. There needs to be a frank discussion about where those cuts will come from.”