The U.S. Marine Corps: The Next Submarine Hunters? 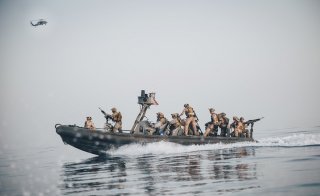 In the future, Marine Littoral Regiments could dot the western Pacific and target threats on land, air, and at sea.

Like the Marines of World War II renown, Marines in the near future may have to hop from island to island in remote areas in the western Pacific Ocean. The new island-hopping strategy—a nod to how to Marine Corps is gearing for a potential conflict with China—would represent a huge shift for the Marine Corps. The long and grinding wars in Iraq and Afghanistan altered the Marine Corps mission from a land-based expeditionary extension of American naval power to essentially another Army. And that’s something the Marine Corps would like to change.

To that end, the Marine Corps has undergone some of the most radical changes in its long and storied history. Much of its artillery and heavy mortars have been disbanded. The Marine Corps has also divested all of its tank battalions, partially in recognition of how difficult it would be to transport the increasingly heavy Abrams main battle tank from island to remote island.

It has also developed a new strategy for taking enemy-held islands by teaming up highly trained Reconnaissance Marines with Air Force Combat Controllers in order to quickly land anti-ship missile-toting vehicles. The Marine Corps is also experimenting with ways in which it could hunt enemy submarines.

Thus, it should come as no surprise that the United States’ force-in-readiness is standing up three new USMC regiments expressly meant to not only hold their own in littoral—near-shore—environments but to excel.

The new Marine Littoral Regiments would be smaller than the typical USMC regiment, down to 1,800–2,000 from about 3,400 or so. It would be subdivided into three groups, a Littoral Combat Team, a Littoral Anti-Air Battalion, and a Littoral Logistics Battalion. A lighter, more mobile presence is the name of the game.

Marine Littoral Combat teams would presumably be built around long-range precision fires, a recent Marine priority that would target enemy surface ships from austere and far-flung specks of land. In contrast, Marine Littoral Anti-Air Battalions would be responsible for keeping an eye on the sky surrounding expeditionary Marine bases as well as acting as forward fuel and ammunition depots for American aircraft, whereas Littoral Logistics Battalions would be in charge of keeping Marines supplied with food, ammunition, and any other things they’d need.

Despite the myriad changes the Marine Corps is currently undergoing to better face a near-peer threat, there has been criticism. Namely that the USMC is too narrowly anticipating its future at the expense of other contingencies it may have to plan for and fight in the near future. Still, littoral areas exist around the world and are not seen just in the western Pacific or the South China Sea. Either way, it seems the Marine Corps is returning to its maritime roots.