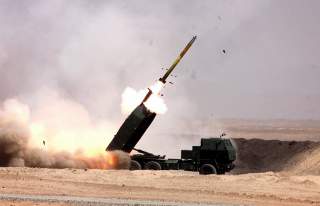 The U.S. Marine Corps is testing out yet another way of deploying its far-firing artillery rocket vehicles for quick precision bombardment of enemy forces.

In mid-August 2019 as part of a wider amphibious-warfare experiment, the Marines rolled a wheeled High-Mobility Artillery Rocket System, or HIMARS, onto a landing craft and sent it across the beach as part of a simulated raid.

Combining landing craft and HIMARS could help the Marines to hit enemy troops from long distance and with a greater chance of surprise.

Megan Eckstein described in detail the wider experiment in an article for the news website of the U.S. Naval Institute.

“U.S. Indo-Pacific Command is investing in exercises this year that test out the naval force’s ability to distribute its people across large swaths of land and sea – and its ability to bring the firepower, logistics and sustainment and sea-control needed to be successful despite the challenges of operating as small units far from the conveniences of a consolidated strike group at sea or land base ashore,” Eckstein wrote.

The experiment took place on and around Japan’s island prefecture Okinawa, where the Pentagon maintains a huge air base and other facilities.

In one phase of the experiment, Marines flying in MV-22 tiltrotors and KC-130 tanker-transports quickly set up an improvised airfield on an island and practiced treating and transporting wounded troops.

In another phase, a three-ship amphibious group centered on the assault ship USS Wasp rehearsed a long-range airfield seizure, a mechanized raid, a long-range vertical assault and the amphibious raid involving the HIMARS.

A HIMARS with Battery Q, 3rd Battalion, 12th Marines, 3rd Marine Division went ashore on a U.S. Navy Landing Craft Utility. An F-35B flew overhead, gathering targeting data with its sophisticated sensors and piping it down to the HIMARS crew.

The exercise “demonstrat[ed] the capability for long-range precision fire support during expeditionary operations,” according to a Marine Corps release. “This was the first time that a HIMARS insert by LCU has ever been completed in the Indo-Pacific region after a simulated amphibious raid, rehearsing naval expeditionary combined-arms maneuver from amphibious shipping.”

The Marines already were working out methods for deploying HIMARS from aircraft. On Dec. 7, 2018, Marines with Marine Aerial Refueler Transport Squadron 352 hauled two HIMARS from Camp Pendleton in California to Dugway Proving Grounds in Utah, where a war game was underway.

At least one of the 12-ton HIMARS rolled off its KC-130J transport, quickly fired a training rocket, then loaded back into the KC-130J for its return flight.

Combined with other new tactics including the amphibious method, HIRAIN could allow U.S. force to quickly position long-range artillery, frustrating an enemy's own movements. The method might even allow American troops to impede China's expansion in the western Pacific.

The Pentagon aims to complicate this expansion. While air and sea forces are central to American strategy in the region, ground troops could play a role, too.

Imagine a Chinese flotilla sailing toward some remote island group near Japan or The Philippines during some near-future war. A Marine rocket battery could quickly deploy to one island aboard Marine or Air Force transports or Navy landing craft and lob a few rockets at the Chinese ships. "After firing each volley, the missile battery would move to a new hide site and await orders to fire again," the California think-tank RAND explained in a 2017 report.