U.S. May Massively Ramp Up Training for Ukrainian Troops 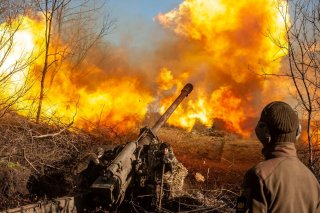 The proposal would see the instruction of as many as 2,500 Ukrainian soldiers per month at a U.S. base in Germany, CNN reported, citing U.S. officials. The plan, if adopted, would drastically ramp up the scale of U.S. efforts to train Ukrainian troops nine months into the Russian invasion. To date, the United States has only trained several thousand Ukrainian soldiers with a focus on helping them operate specific weapons systems. Under the new proposal, a larger number of Ukrainian troops would receive some of the most advanced Western-provided training to date in the realm of “combined arms training,” learning to coordinate infantry maneuvers with artillery support.

CNN reported that the plan, which was “made at the behest of Ukraine,” is currently under interagency review. It is unclear when the request was first made by Kyiv. A senior Biden administration declined to offer in-depth commentary on the report, telling CNN that “we won’t get ahead of decisions that haven’t been made, but we are constantly looking for ways to make sure the Ukrainians have the skills they need to succeed on the battlefield as Ukraine defends their territory from Russian aggression.”

The proposal comes amid ongoing Western efforts to support Ukraine’s armed forces over the long term. Experts say the coming winter season may be accompanied by a lull in the fighting, which has been largely concentrated in the eastern Donbass region following Russia’s withdrawal from Kherson in the south. The coming months could provide Kyiv, which has previously requested a greater commitment from its Western partners to provide the training needed to build and sustain a robust defense force, with an opportunity to divert some of its troops for training abroad.

The British military is running a large-scale training program of its own for Ukrainian troops. Operation Interflex, launched in June, seeks to support as many as 10,000 soldiers per year in camps across Britain. The UK’s efforts are largely complementary to the plan pitched by Kyiv to the White House. Whereas the British program is focused on putting fresh recruits through basic training, the new proposal seeks to provide more advanced training in combined arms maneuvers.

Finland’s president, Sauli Niinistö, said earlier this week that the Finnish military could offer training along with the military equipment it is sending to Ukraine. "Of course, training on these could be very appropriate," he told a Finnish media outlet, as reported by Newsweek. "We know how to use them."