Ukraine at a Crossroads: Will the West Fold After Kherson? 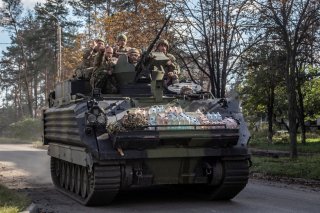 The liberation of Kherson represents another major success for the Ukrainian people’s struggle against invading Russian forces. The Russian retreat from Kherson is Moscow’s most significant territorial setback since the rout in Kharkiv. However, Ukraine’s victory may turn out to be a double-edged sword in that it may lead its most important ally, the United States, to urge Kyiv to seek a diplomatic settlement with Moscow. This option may look reasonable, logical, and humane from Washington’s perspective but, over the long run, it will not remove security threats to Ukraine and Europe. Freezing the war in Ukraine might benefit Russia and the West but it will not solve the problems this war has generated between Russia and Ukraine, and Russia and the West.

The Ukrainian army’s biggest problem after Kherson is conducting ground operations during a winter stalemate. Storming the Dnipro River in southern Ukraine is out of the question since it would result in unacceptable losses. The only option for offensive operations for either the Ukrainian or the Russian army is in the Donetsk region. However, the winter season will complicate offensive efforts by testing the resiliency of personnel and equipment. At the same time, increases in the cost of living and an energy supply crunch may stretch the patience of European allies thin. Moscow will continue exploiting the uncertainties and anxieties surrounding the war by periodically making references to nuclear weapons and “dirty bombs.” Kyiv will continue attacking Russia’s Black Sea Fleet with its new fleet of drone boats. Losing major Black Sea Fleet vessels is a more considerable setback for Russia than the retreat from Kherson.

Freezing the war after Kherson promises certain tangible benefits to Moscow, especially if a truce is achieved under “the new realities.” The Kremlin can claim victory by insisting that much of Russia’s “historical lands” have been recovered from Ukraine. The land bridge from Russia to Crimea will ensure the long-term security of Crimea and the Black Sea Fleet. Moscow could use a multi-year pause to restructure its ground forces and attack Ukraine again when the Russian army has been rebuilt. Further, a break in the war will help Moscow cement its control over the captured lands to be better prepared for a future “special military operation.” Moscow will try anything to reverse its war fortunes, including by implementing its version of “peace enforcement” measures. Threatening the West with nuclear weapons and dirty bombs, and accidentally hitting NATO members with missiles or drones are indicative of such measures.

Ukraine, on the other hand, would lose if it agreed to freeze the war and let Russian forces consolidate control over captured territory. To be certain, peace will bring dividends by removing pressure from Kyiv’s Western allies and the Ukrainian people. After that, it would be impossible for Kyiv to restart the war if it ever wanted to recover the lost territories. At the same time, the Ukrainian armed forces will have to maintain a state of constant readiness to guard against new attacks from Russia. Kyiv is also afraid to lose Western support for its cause. With generous energy supply contracts, Moscow would renew its charm offensive in European capitals and find potential allies there as it had done before. Most of all, Kyiv’s biggest fear is that someone who is willing to deal with the Russians may win the U.S. presidential election in two years. Great powers often bargain and deal with each other, and the currencies of their trade are the national interests of smaller powers. Ukrainian leaders do not want their country’s interests to be traded away.

Policymakers in the White House and State Department understand that nothing can be settled conclusively by an armistice between Ukraine and Russia. The problem would be passed on to the next administration or even one after that. Besides, even if achieving long-term peace was possible between Ukraine and Russia, Moscow has several frozen conflicts that it could restart when it feels confident that the Russian army can win or that it can achieve collateral advantages, such as in Moldova and Georgia. Moscow may transfer its attention to Karabakh and start improving the waning fortunes of its ally Armenia. The Belarus opposition is seriously concerned that with an armistice in Ukraine, Russia may turn north and simply annex their country. Russia already has a sizable military presence in Belarus and the country’s hectic and unpredictable leader is in Moscow’s pocket. Additionally, Russia has a sizable military contingent in Syria, developed an appetite toward Libya, and conducts paramilitary operations in other African countries. Nothing prevents Russia from generating new conflicts, especially if the Kremlin believes that it can hurt Western interests. For instance, if a rebuilt Russian army invaded Estonia in a couple of years, most of the fighting would have to be done by Estonia’s NATO allies, especially the United States. From a political perspective, it is a much better option for the United States for Russia to be comprehensively defeated in Ukraine so that it is not able to mount another such war for at least a generation.

However, there are other reasons why Washington might want to secure peace. Moscow’s repeated threats to use nuclear weapons animate this argument. If Ukraine and Russia reached a settlement, even if only for a few years, it would remove the immediate threat of nuclear war between NATO and Russia. It is a sad fact that the American nuclear triad has failed to fulfill its deterrence mission. When deterrence works, adversaries do not credibly discuss deploying nuclear weapons to achieve war objectives. All post-Cold War U.S. administrations have underfunded and neglected the nation’s nuclear arsenal—very little has been done to develop new warheads or their delivery systems. In recent years, sentiments about getting rid of nuclear weapons or abolishing NATO have even been voiced at the highest levels of the U.S. government. At the same time, Russia has invested in a wide variety of new warheads and delivery systems, and loudly demonstrated its readiness to test them. That is why those in Washington who know what is at stake want diplomacy to take over so that the United States has time to reconsider its strategic posture and make the necessary adjustments.

Even though an armistice would benefit the United States and Russia, a quick peace agreement might be tough to achieve. For one, Ukraine would not agree, and its NATO neighbors (save Hungary) would strenuously object as well. Moscow may not make a strong push for peace either and decide to play for time by perpetuating a battlefield stalemate. Hope is not a strategy, but if something in Washington changed in Russia’s favor, it would help the Kremlin achieve its long-term objectives.

Dr. Lasha Tchantouridze is a professor and Director of the graduate programs in Diplomacy and International Relations at Norwich University.