The U.S. Military Is Testing Hypersonic Missiles on B-52 Bombers 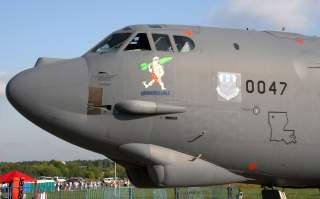 The U.S. Air Force successfully conducted the first flight test of its new hypersonic missile. An AGM-183A Air Launched Rapid Response Weapon, or ARRW, was launched from a B-52 bomber at Edwards Air Force Base, California.

Though billed as a flight test, the missile did not actually take flight. “A sensor-only version of the ARRW prototype was carried externally by a B-52 during the test to gather environmental and aircraft handling data,” according to the Air Force announcement. “The test gathered data on drag and vibration impacts on the weapon itself and on the external carriage equipment of the aircraft. The prototype did not have explosives and it was not released from the B-52 during the flight test. This type of data collection is required for all Air Force weapon systems undergoing development.”

ARRW is one of two Air Force “rapid prototyping” programs aimed at quickly deploying a hypersonic missile, which is defined as an object with a speed of at least Mach 5. The other is the Hypersonic Conventional Strike Weapon, or HCSW. ARRW is set to reach early operational capability by fiscal year 2022.

ARRW is descended from Tactical Boost Glide, a Defense Advanced Research Projects Agency (DARPA) project to develop an unpowered tactical glider that would be launched by a rocket high into the upper atmosphere, and then glide down on to its target at Mach 20, or 15,000 miles per hour. Like an ICBM warhead, such an object would be hard to intercept. Unlike an ICBM warhead on a ballistic trajectory, the glider could maneuver like an airplane to avoid interception.

The exact capabilities and goals of ARRW have not been revealed. But the project is related to Tactical Boost Glide, which in turn is related to DARPA’s Hypersonic Technology Vehicle 2, which reached a speed of Mach 20 during a 2012 test, before losing control and burning up. At the same time, the Army, Navy and Air Force are working together on the Conventional Prompt Strike project, which aims to develop a strategic hypersonic weapon that can hit any target on Earth within one hour.

Strangely, one company is developing both ARRW and HCSW. In April 2018, Lockheed Martin was awarded a $928 million contract for HCSW, and in August 2018, a $480 million contract for ARRW. A 2018 Flightglobal article cited Air Force documents that revealed how the Air Force had problems with various contractors vying for the ARRW development contract.

While Lockheed Martin’s proposal met Air Force criteria, fielding an operational hypersonic missile within three years seems ambitious, especially if the glider is expected to travel at twenty times the speed of sound without burning up or losing control. “The flight test serves as the first of many flight tests that will expand the test parameters and capabilities of the ARRW prototype,” the Air Force said.

Whatever the capabilities of ARRW and HSCW, what’s clear is the impetus for the Pentagon’s haste. Russia and China have been aggressively pursuing hypersonic weapons, to the point where the U.S. military fears it has no defense against them.

Russia has a suite of hypersonic missiles, including the KH-47M2 Kinzhal, an air-launched version of the Iskander short-range ballistic missile. Additionally, Moscow has the Zircon anti-ship missile and the Avangard, which uses an ICBM to loft a nuclear-armed glider. In 2018, China claimed a successful test of the Starry Sky 2 hypersonic glider.

As always, it is important to remember that no nation’s hypersonic weapons have been tested in combat.