The U.S. Military Wants Start-Ups to Help It Build Better Drones and Robots 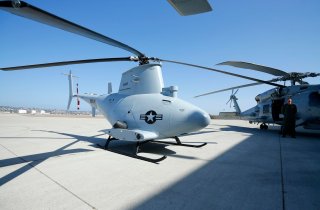 “We are working on autonomy, sense and avoid technology and robust navigation in a GPS denied environment,” Hunter Hudson, Director, Northrop Grumman, told The National Interest in an interview.

“We are challenging the community to see who has great solutions,” Hudson said.

The outreach effort is, in part, grounded in the notion that many small, enterprising new businesses have and will uncover unprecedented innovations with far-reaching implications for military applications of autonomy.

“We are looking to encourage open innovation and partnering between Northrop Grumman and emerging new, non-traditional players in the market that can bring agile product development efforts into operation,” Van Espahbodi, Co-Founder and Managing Partner, Starburst Aerospace.

Military development of robotics, autonomous systems, manned-unmanned teaming and drone systems continue to take on new urgency given the pace of technological change. While autonomy has come a long way in recent years, there are still many impactful milestones on the horizon.

These include aerial manned-unmanned teaming wherein fighter jets control nearby drones from the cockpit. Furthermore, the military is looking into new algorithms, improved ground robot “sense and avoid” technology and various combat uses for computer automation.

Air autonomy, while still a challenge, is less difficult than ground autonomy, given that there are few obstacles in the sky. Algorithms enabling ground navigation present unique challenges given how quickly obstacles emerge, circumstances change and unmanned systems need to instantly maneuver in relation to other moving objects.

This kind of capability requires still-emerging algorithms to a certain extent. The concept is to empower an autonomous vehicle to, for instance, see a tank ditch, recognize what it is, analyze it in context with nearby terrain and then breach or change the configuration of the ditch such that other vehicles can pass. The Army successfully demonstrated this last year.

All the services are increasingly invested in the conceptual, tactical and technological ramifications of fast-progress in the area of autonomy. For instance, the Army expects that most, if not all, of its future armored vehicles will function with an ability to operate a small fleet of nearby drones, often networking them for key attack or reconnaissance missions. Meanwhile, the Navy is moving quickly with a “Ghost Fleet” of Unmanned Surface Vessels designed to autonomously coordinate missions, share information and transmit crucial, time-sensitive data to human commanders. Finally, the Air Force is working on launching autonomous recoverable drone swarms from large airborne motherships or enabling fighter jets to control forward operating unmanned systems with reduced latency by virtue of not needing a ground control station.

It is precisely these kinds of combat predicaments which new start-up innovators might be poised to address, according to expert autonomy technologists at Northrop Grumman. The thrust of the pitch is collaborative, meaning there is unique value in harnessing the massive technology expertise and resources of a defense giant such as Northrop with promising new initiatives bringing unanticipated promise.

For example, Hunter explained that “Northrop builds systems with a layered and redundant architecture,” as a way to build resilience into unmanned systems, improve performance and ensure continued functionality in the face of enemy attacks.

This kind of layered technical expertise, it seems clear, might form a particularly useful combination with extremely promising (yet untested) new solutions potentially able to generate large technological breakthroughs in the field.