U.S. Missile Defenses Just Killed an ICBM In a Test (But One Expert Has Some Concerns) 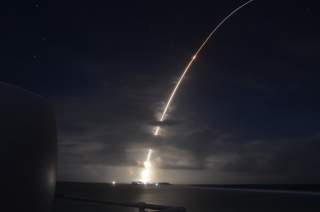 The test comes two years after the MDA for the first time claimed to intercept an ICBM-like rocket using the GMD system. There were reasons to be skeptical of the agency's 2017 claim. Likewise there are reasons to doubt the 2019 test was as successful as the military insisted it was.

The target rocket blasted off from the Reagan Test Site on Kwajalein Atoll in the Pacific Ocean. Space, ground- and sea-based sensors tracked the target. Four thousand miles away, missileers at the GMD site at Vandenberg Air Force Base in California launched two 50-feet-tall GMI missiles.

But Laura Grego, a missile expert with the Massachusetts-based Union of Concerned Scientists, is skeptical. "The test was really secretive, much more so than in past years," Grego told National Public Radio. "It was called a success, but we can't tell from public information how high the bar for success was set."

The same lack of transparency plagued the 2017 test. MDA declined to specify how fast the target was traveling in that test. The high speed of a true ICBM is one of the main reasons that class of rocket is so hard to intercept. An intercontinental-range missile can travel as fast as 20 times the speed of sound.

In the days prior to the 2017 trial, Grego examined the distances the two test rockets were expected to travel—and how quickly they would do so—and concluded that the MDA's target rocket would probably be significantly slower than an ICBM would be.

If it's true that the Pentagon tests its missile-defenses against slower targets than is realistic, then the military doesn't really know if the defenses truly work. The GMD system is the only U.S. missile-defense that is supposed to be able to hit ICBMs.

The GMD missile "shield" includes 40 operational interceptor missiles at Fort Greely in Alaska and four at Vandenberg. The Pentagon plans to add another 20 GMI rockets over the next few years.

But Grego cautioned against placing too much faith in the system. "We should not be thinking about the GMD as a robust defense or a robust deterrent," she told NPR. "It does not provide protection in a real-world sense."

Despite lingering doubts about the effectiveness of existing missile-defenses, the military plans to add new and equally unproven system to the U.S. missile shield. The U.S. Navy announced in early 2019 that it soon would test its SM-3 missile-interceptor against an ICBM-class target.

The SM-3 test could face the same challenges that have complicated the GMD trials. The target rocket must fly as fast as a true ICBM does in order to the test to have any merit.

Russia, for one, isn't taking any chances. In 2018 Russian president Vladimir Putin rushed development of the Kremlin's new hypersonic Avangard nuclear missile, a Mach-20 glider that travels lower than an ICBM does, potentially foiling missiles such as the SM-3 and GMD, which are designed to work at very high altitudes.