The U.S. Must Exercise Restraint in Central Asia 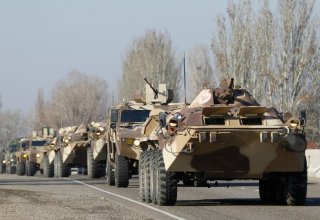 Before the Shanghai Cooperation Organization (SC) summit in Samarkand, Uzbekistan this month, two member states, Tajikistan and Kyrgyzstan, clashed over territorial disputes. September 20 marked the official signing of a peace treaty and although the future of Tajik-Kyrgyz security remains unclear, the United States appears interested in engaging with Central Asian countries economically and diplomatically.

A recent Politico report noted that U.S. officials have been quietly negotiating with Uzbekistan and Tajikistan to trade fifty American helicopters flown across their borders by Afghan pilots last year in exchange “for help hunting terrorists in Afghanistan” and “to gain a foothold in a region where the U.S. military no longer has a presence on the ground.” This would be a tragic mistake; any future U.S military involvement in Central Asia should be out of the question. It would open an easy pathway to entanglement in more unnecessary wars with countries like Tajikistan, Kyrgyzstan, and other great powers.

The Tajik-Kyrgyz border clashes have been ongoing over the last few years. Despite lingering uncertainty in the region, the United States should be wary of becoming entangled in Central Asian disputes. As the United States began its military campaign in Afghanistan, temporary bases were established in several Central Asian countries like Uzbekistan and Kyrgyzstan to serve as transport hubs to move troops and supplies into Afghanistan. During this period, China and Russia supported the U.S.-led Afghan war.

But times have changed. The United States is no longer a valuable regional partner following its exit from Afghanistan. After spending over $2 trillion and losing thousands of American lives, the Biden administration’s decision to withdraw from Afghanistan seemed to be a mark in favor of ending endless wars. Nonetheless, Washington’s foreign policy elite seems to think that the whole region of Central Asia needs to be filled again with U.S. troops.

This conflict has little impact on U.S. security, mainly because of the decision to withdraw from Afghanistan. The presence of any U.S. military personnel exposed them to the dangers of blowback but with a reduction of military meddling in Central Asian affairs, violent local non-state actors will have less of a reason to retaliate against the United States.

Additionally, given the distance of the conflict from the United States and the lack of risks to U.S. security, the United States has no role to play in quelling Central Asian disputes. These border clashes are of much greater concern to those with security commitments in Central Asia. The Collective Security Treaty Organization (CSTO), which includes Tajikistan and Kyrgyzstan, should be responsible for resolving its members’ territorial disputes. Intervention risks damaging U.S. relations with potential economic and diplomatic partners in Central Asia.

Beyond getting entangled in an unnecessary conflict, further U.S. action in the region could threaten Russia. Russia has a history of utilizing its “peacekeeping” forces to settle the internal and external conflicts of CSTO members. The most recent example was their deployment of “peacekeeping” forces to Kazakhstan to aid the government in controlling violent protests that erupted last January. If anything, this conflict posed a potential security concern for Russia given its proximity. One thing the United States cannot afford to do right now is to threaten Putin more than he already is in Ukraine.

China, which is a member of the Shanghai Cooperation Organization (SCO), is another player that has a more compelling reason to help prevent future Tajik-Kyrgyz border clashes. China has deep roots in founding the SCO by signing the Treaty on Deepening Military Trust in Border Regions with other members, including Russia. Tajikistan and Kyrgyzstan have been responsive to the Chinese presence in the region, which includes military exercises, military equipment transfers, the construction of security infrastructure, and the deployment of private security companies. Frustrating China over a country with little strategic value would be a mistake for the United States amidst its involvement in Ukraine and problems with massive inflation.

The violent Tajik-Kyrgyz border conflict is one of the unfortunate legacies of the fall of the Soviet Union. While these conflicts might make future U.S. non-military engagement in Central Asia more complex, the United States should be mindful of the costly lessons learned in Afghanistan. It is not worth it for the United States to become militarily involved in what are essentially local disputes.

Alex Little is an MS graduate of Georgia Tech and specializes in Russian and Central Asian affairs.