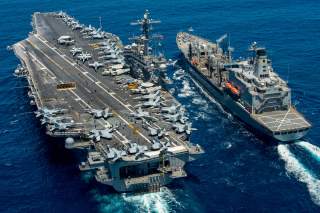 One of the U.S. Navy’s oldest carriers will be the first to deploy with the service’s newest fighter, the Navy announced.

The Washington State-based USS Carl Vinson, which launched in 1983, is scheduled to deploy in 2021 to the Pacific region with the new F-35C stealth fighters from California-based Strike-Fighter Squadron 147 aboard.

The Navy in February 2019 declared VFA-147 to be combat-ready. The fleet hopes to acquire around 200 F-35Cs in order to equip each of 10 carrier air wings with one squadron of the radar-evading jets.

When Ford first deploys, possibly in 2024, she’ll embark only older F/A-18E/F Super Hornets as her main warplane. Trade publication Breaking Defense was among the first to report the deployment schedule.

The mismatch between planes and ships is the result of the platforms’ unsynchronized development schedules. The Navy locked down the Ford’s design before the F-35 program office in the mid-2000s finalized the F-35C’s own design.

As a result, the first two Fords were already nearing completion by the time the fleet knew how much heat the F-35C’s powerful Pratt & Whitney engine would produce and how much data the stealth fighter would be able to transmit via radio link — and how much of that data would be classified and require special secure rooms for handling.

To make a carrier F-35C-compatible, the Navy must reinforce a carrier’s jet-blast shields, boost communications bandwidth and add secure internal spaces. That’s only possible while a flattop is undergoing deep maintenance in a shipyard. The Navy plans those maintenance periods years or even a decade in advance, leaving little flexibility for abruptly modifying a carrier to accommodate a radically new plane type.

Still, Congress is unhappy about the absence of F-35Cs on the early Fords. The House Armed Services seapower and projection forces subcommittee included in its version of the 2020 National Defense Authorization Act a ban on the Navy taking delivery of the third Ford-class carrier John F. Kennedy unless the carrier can deploy with F-35Cs.

The Navy originally planned to omit the gear for the F-35 in order to keep Kennedy under the $11-billion cost cap that Congress has imposed on the ship’s construction. The sailing branch planned to christen Kennedy in late 2019 and add F-35-compatibility at a later date.

But as of early November 2019, Ford still wasn’t ready for delivery.

The Ford-class, in theory, represents a major improvement over the previous Nimitz-class supercarriers. The Navy so has ordered four Fords. Lead vessel Ford originally was supposed to deploy for the first time in 2022, but in late 2019 the Navy bumped back that deployment to 2024 at the earliest.