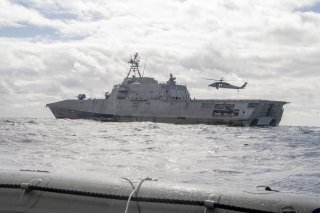 The U.S. Navy is not only fast-tracking a new fleet of drone boats but also arming them with new weapons, sensors, and cutting edge radar systems to align with its emerging Distributed Maritime Operations strategy...an evolving concept aimed at networking a growing fleet of manned and unmanned systems operating with ever-increasing levels of autonomy.

The exploration of unmanned systems weapons and technology integration aligns with the Navy’s current push to expand the integration of a new family of highly sensitive and much longer-range SPY-6 radar applications across a wider sphere of platforms, to include the new Frigate (FFG/X), amphibs, and even the Littoral Combat Ship. SPY-6 radars operate with as much as thirty-five times the detection capability of most existing radars, bringing ship commanders and ability to detect objects twice as small and twice as far away as current systems.

Raytheon engineers explain that the SPY-6 radars were built to both upgrade as technology matures and also easily scale and reconfigure to integrate onto new platforms such as unmanned ships.

“When they architected the SPY-6, they were looking at commonality to engineer common hardware and software across the fleet to improve operations and maintenance. Hardware does not have to change as often as software changes. New software can work to discern different threats. There is only one logistics trail to support the radar, so new technology can seamlessly be integrated into the fleet and put on all the platforms, both existing and emerging. This is a cost savings and it expedites getting new capability to the fleet,” Scott Spence, Director for Naval Radar Systems for Raytheon Missiles & Defense, told The National Interest in an interview.

“In the future, we can work with the GAN we have today to get more power out of it or work on innovative ways to process the energy received from the targets,” Spence said

Should newer configurations, with comparable or superior performance, come to fruition, SPY-6s scalability could enable a wide sphere of possible applications for the technology.

Anticipated improvements, adaptations, and innovations aimed at streamlining power density capacity into new, scalable configurations and, as Spence described it, “improve upon the performance of the current RF technology. We are working to make sure all the technical upgrades we contemplate are easy to deploy into the fleet. If we use the same form factor, you don’t have to bust open the hull. New capability fits into the same spot.”

Additional radar flexibility, sensitivity, and precision can be found through the use of multi-frequency input for better targeting, according to former DDG 51 Program Manager Capt. Mark Vandroff quoted in a 2016 essay from the Center for International and Maritime Security.

“We hook up the SPY-6 AMDR, which is a S-BAND radar, with the existing and already planned for DDG 51 X-Band emitter AN/SPQ-9B to get the full radar suite for the Flight III. A lot of good things happen for targeting and your reaction time by synthesizing multi-band input,” Vandroff said in the essay.

A 2019 RAND Corp. study called “Advancing Autonomous Systems: An Analysis of Future and Current Technology for Unmanned Maritime Vehicles,” lends additional support to Vandroff’s comments, stating that a radar system that simultaneously uses the S and X bands “allows a vessel to take advantage of the higher resolution of the X band with the improved poor-weather performance of the S band.”