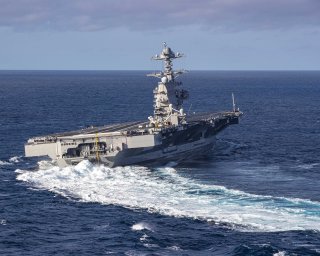 The announcement comes after the Navy’s extensive shock trials in 2021.

Navy personnel searched every nook and cranny aboard the Ford after the ship was exposed to explosions during shock trials, a Navy press release said.

“At the start of CVN 78’s PIA, teams conducted detailed inspections, assessing potential damage sustained during FSST,” the press release said. “The Navy had conducted shock trials on the Nimitz-class carrier USS Theodore Roosevelt (CVN 71) in 1987, and used those results plus other modeling and simulation to estimate the potential impact from the explosive events on the overall PIA workload. FSST-related repairs during Gerald R. Ford’s PIA proved fewer than anticipated.”

The Navy agreed to have the Ford undergo shock trials at the urging of Congress, including the late Sen. John McCain (R-Ariz.). The Ford had already fallen behind schedule to enter operational service, but shock trials were deemed important for the lead ship in a class of carriers that incorporated several new technologies.

“Ford required only 20 percent of the repair work we saw with TR [Theodore Roosevelt],” said Rear Adm. James P. Downey, program executive officer for aircraft carriers, in the press release. Of that repair work, about 85 percent was completed by the ship’s crew rather than the shipyard.

The Navy explained that carrier modernization work had been streamlined compared to Nimitz carriers, the Navy’s previous carrier design. The Navy can now upgrade command and control spaces without cutting into the ship’s interior.

“Historically, about 40% of modernization work on Nimitz-class carriers goes into rip out, which involves cutting and welding,” Downey said. “The Navy specifically designed Ford with a flexible infrastructure, so you can build in new capabilities to enhance system integration that facilitate immediate operational gains for the warfighter.”

Though the Ford’s progress is moving along at a fast clip, the first-of-class design has faced several developmental problems. One of the most significant has been the ship’s elevators designed to carry ammunition and equipment.

Now that shock trials and post-trial repairs are complete, the Navy is preparing for the Ford’s first deployment. The Ford will “embark its air wing, CVW-8, and will begin rounds of system qualification tests, flight deck certification, three phases of air warfare training, and a Combat Systems Operational Readiness Evaluation,” prior to deployment.

Once in service, the USS Gerald R. Ford is expected to remain in service until approximately 2072.