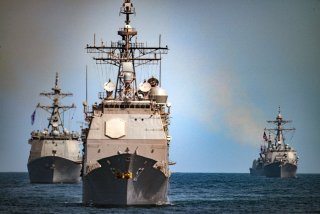 William LaPlante, a former Assistant Secretary of the Air Force and currently the nominee for the Pentagon’s number one acquisition post, told the Senate Armed Services Committee that the U.S. Navy needs many more ships.

“We need more numbers” to increase the Navy’s fleet. “We want survivable” ships, Mr. LaPlante explained during his opening statement before the committee. He emphasized that both his and the Navy’s focus “must be laser-like on speed and scale,” using software to acquire ships.

Modernizing the Navy means “identifying the capabilities that are needed, setting a plan for acquiring them, and working with partners in industry to deliver them efficiently,” Erik Raven, a Senate Appropriations Committee staffer, explained. He is nominated to be Under Secretary of the Navy.

Several factors will determine the ultimate size of the Navy, Mr. Raven explained, including the Navy’s thirty-year shipbuilding plan, as well as a “force structure assessment.”

The Navy currently has 298 ships in active service but would like to expand to 355 ships in total. China’s navy, the People’s Liberation Army Navy, currently holds the title of the world’s largest naval fleet.

Accurate cost estimates are absolutely critical for the Navy’s future, Mr. LePlante explained, citing two of the United States military’s biggest-ever programs. “We learned the lesson from Ford and thankfully we learned the lesson from F-35 … you have to have mature technology,” he said. LePlante added in writing that “my understanding is that there are clear sustainment challenges facing the F-35 program in terms of both readiness and affordability,” due at least in part to high sustainment costs.

The Navy would like to emulate the success of the B-21 Raider program, a U.S. Air Force initiative that will equip the United States with the world’s most advanced strategic bomber. Though many aspects of that program are shrouded in secrecy, publicly available information suggests that it has proceeded rapidly and according to schedule.

LaPlante highlighted the bomber’s “open systems that we can upgrade very fast.” The key idea is “we’ve got to get these capabilities into those weapons systems” in the future. Modularity is crucially important for future viability.

Mr. Raven explained that modernization “applies not only to major platforms and breakthrough technologies like hypersonic missiles and artificial intelligence. It also applies to the facilities and infrastructure.”

In his statement, he acknowledged the military's mistakes, citing the U.S. Air Force's decision to stop research into hypersonic glide vehicles after several failures around ten years ago. Now the Air Force is playing catchup, with some analysts assessing that China has overtaken the United States in this field.