The U.S. Navy and Marine Corps are Getting a Powerful New Drone Capability 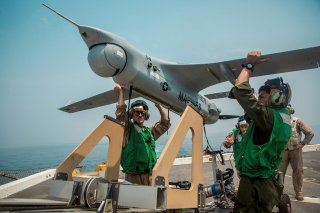 The defense and technology company Logos Technologies, recently announced that the Navy awarded them nearly $7 million for developing and delivering a wide-area motion imagery (WAMI) sensor for use with the Navy’s RQ-21A Blackjack drone.

The award is for proof-of-concept flight tests that will evaluate a version of the company’s BlackKite sensor which the military calls Blackcard.

Logos Technologies’ new WAMI Blackcard sensor is a derivative of their BlackKite sensor. The BlackKite weighs less than twenty-eight pounds, but has a coverage area of five square miles, or about twelve kilometers. Doug Rombough, a Logos Technologies VP stated that BlackKite is “a force multiplier in terms of enhanced situational awareness. The system catches and records the entire area in real time and streams multiple video ‘chip-outs’ down to handheld devices on the ground.”

The Navy/Marine Corps Blackjack is a rather odd-looking bird, but quite capable. It uses a rear-facing push propeller design and has a twin tail boom, along with steeply-raked winglets. Although Blackjacks do not carry munitions, they operate as a group of five drones controlled by two ground controllers. As a group, they can cover quite a wide area.

The Blackjack is designed to be expeditionary in nature. It does not require a runway for take-off or landings, thanks in part to its relatively short wingspan, which is just sixteen feet, or nearly five meters in length. It can be launched from both land and at sea.

Among the Blackjack’s main missions are reconnaissance and surveillance, and both day and night intelligence gathering. It boasts a sixteen-hour flight endurance, and range is listed at fifty kilometers. While the Blackjack drone already has a wide suite of sensors, including infrared markers, laser range finders, video capture, and powerful communications tools, the Blackcard/BlackKite gives the platform a new capability.

What makes WAMI so special is its extremely wide monitoring capabilities Rombough explained to reporters. “Prior to WAMI, you had simply the full-motion video sensors; and obviously full-motion videos are awesome because they are very high resolution. They can zoom in on an area. The challenge with FMV is you’ve got that very narrow field of view, kind of like looking through a soda straw.”

WAMI allows operators to see the big picture. With the ability to observe an area the size of a small city, Blackjack can pinpoint areas of interest, and zoom in to observe people or vehicles on the ground. In addition, the BlackKite will be able to store up to six hours of mission data for later review, as well as transmit the data it gathers to ground operators in real time.

The joint Navy-USMC drone initiative is just the latest development in the sailing branch’s drone program. Most notably, the Marine Corps has poured more and more money into their unmanned aerial vehicle program in recent years.

Watch this topic for additional details in the future.