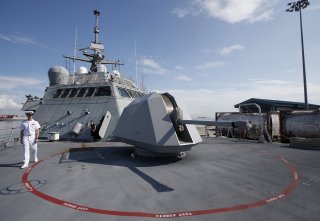 The U.S. Navy will retire nine of its littoral combat ships (LCS) several years earlier than expected, it announced last week. Under Secretary of the Navy Meredith Berger fielded questions about the decision in a press conference last week about the Navy’s 2023 budget.

Berger was asked how the Navy justified the retirement of the nine warships at a time when most analysts believe it is important for the fleet size to be growing.

“We are taking that in consideration a lot of the things that you just mentioned and it's a hard thing to make a decision to decommission ships, but what we are looking at is what offers the best capability against the threats that we are facing,” Berger said.

“And so as we think about how to build a force that we can sustain within the budget that we have that's how we've made some of these, again, tough decisions. And as we look across LCS, this is a place where we have identified that there are real costs, especially for the Freedom class to be able to make some of the repairs that are needed on those as we measure that against what is the best contribution to the capabilities that we need.”

Though the U.S. Navy is considered qualitatively superior to perhaps any other navy, it is not the largest numerically. That distinction belongs to the People’s Liberation Army Navy, the Chinese fleet.

Part of the issue surrounding the Freedom-class specifically is a particularly problematic design flaw. The class’ combining gear, a piece of machinery that synchronizes power output from the ship’s gas turbine and diesel engines, is failure-prone and expensive to replace.

In addition, Berger said the Navy determined that part of the Freedom-class anti-submarine warfare package is perhaps not as necessary as the U.S. Navy anticipated initially.

“We're able to take that from the decom and put some of that funding towards some of the capability that we need, and similarly we're grateful for the support for the decommissioning of the (Ticonderoga-class) cruisers,” she said. “This is a place where we can prioritize safety and also be able to make sure that overall we have the right mix to meet the capability and capacity that we need.”

Though not the largest navy, the United States Navy still holds a qualitative edge. And given the increasing importance placed on the Indo-Pacific region, the U.S. Navy’s medium and long-term projections of U.S. Navy ship numbers indicate an increasing trend.

Caleb Larson is a multimedia journalist and defense writer with The National Interest. A graduate of UCLA, he also holds a Master of Public Policy and lives in Berlin. He covers the intersection of conflict, security, and technology, focusing on American foreign policy, European security, and German society for both print and radio. Follow him on Twitter @calebmlarson.