The U.S. Navy Disputes Chinese Claims of Being "Expelled" From South China Sea 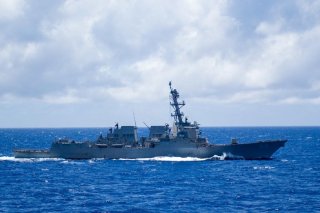 The Chinese People's Liberation Army Navy (PLAN) claimed on Thursday that it expelled a U.S. Navy warship that had "trespassed into Chinese territorial waters" off the Parcel Islands (Xisha Islands) in the South China Sea The Global Times of China reported. A Chinese military spokesperson was quoted to claim that U.S. operations amid the COVID-19 pandemic showed the U.S. is the source that sabotages peace and stability in the region, while analysts were also cited to suggest that U.S. provocations justified Beijing's need to increase its defense budget.

Chinese PLAN Senior Colonel Li Huamin, the spokesperson for the PLA Southern Theater Command, had said the U.S. warship had trespassed when it approached the islands without authorization from the Chinese government. The actions were called a "naked hegemonic navigation action, which seriously violated China's sovereignty and security interests."

According to the Chinese, USS Mustin was monitored, identified, warned and expelled. The U.S. Navy sees it another way.

"On May 28 (local time), USS Mustin (DDG 89) asserted navigational rights and freedoms in the Paracel Islands, consistent with international law," Lt. Anthony Junco, a spokesperson for the US Navy's 7th Fleet, said in a statement as reported by CNN. "By conducting this operation, the United States demonstrated that these waters are beyond what China can lawfully claim as its territorial sea."

U.S. Navy sources said the USS Mustin passed within 12 nautical miles of Woody Island and Pyramid Rock in the Parcel Islands, an archipelago that is made up of about 130 small coral islands and reefs.

The islands are approximately equidistant from both the People's Republic of China and Vietnam. The islands had been claimed by the South Vietnam, a claim that was inherited by the Socialist Republic of Vietnam – however, in January 1974 the PRC expelled South Vietnamese forces from the islands and in recent years have built some 20 outposts including on reclaimed land.

China has been flexing its naval muscles in the region since the outbreak of the novel coronavirus pandemic, which impacted the U.S. Navy when the crew of USS Theodore Roosevelt (CVN 71) was sidelined in Guam while its crew recovered from a COVID-19 outbreak. This week the aircraft carrier began preparations to return to sea. U.S. military officials have accused Beijing of seeking to exploit the pandemic to gain military and economic advantages in the region.

The situation in the South China Sea could get more complicated as the PLAN may deploy two aircraft carriers for the first time during an exercise this summer. Stars & Stripes has reported that the carriers Liaonging and Shandong have been conducting combat readiness training in the Yellow Sea.