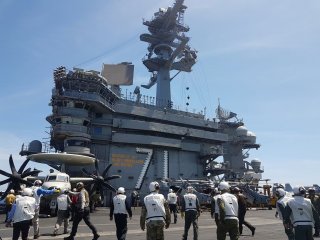 Before, during and after serving as President of the United States, Theodore Roosevelt was a hard man to keep down—he survived an assassination attempt and nearly died during a journey in the Amazon jungle. Now the aircraft carrier that bears his name is preparing to make its grand return as well, as sailors aboard the USS Theodore Roosevelt (CVN 71) have been simulating being at sea while moored at Naval Base Guam.

Since late March the ship has been in port in Guam after the outbreak of the novel coronavirus spread rapidly throughout the crew, and upended the ship’s Pacific deployment. It marked the first time that infections had been detected aboard a U.S. Navy warship at sea. Since that time, the ship has seen more than one thousand cases, several hospitalizations and one death. Some crewmen actually came down with the virus more than once. However, after nearly two months the ship has been preparing to return to sea.

During the simulation exercises—or “fast cruise”—the crew has been simulating normal underway conditions while testing the critical systems required to sustain the ship during its upcoming underway operations.

“Fast cruise is a major milestone for the ship and for the crew,” said Capt. Carlos Sardiello, commanding officer of Theodore Roosevelt. “Our Sailors have tested all of the ship’s systems individually, but this is our opportunity to integrate all of that together and show that Theodore Roosevelt is ready and able to go back to sea.”

Since April 29, the ship has been conducting a crew swap that has rotated sailors who have completed quarantine and isolation back on board. Those sailors have received two negative COVID-19 tests. This week the U.S Navy reported that more than 2,900 sailors have returned and the ship is now one step closer to recommencing its scheduled deployment to the Indo-Pacific.

“We passed a rigorous certification process before deployment, validating the crew’s ability to safely navigate, launch and recover aircraft and respond to on-board emergencies,” added Lt. Cmdr. DeCrisha Nolan, Theodore Roosevelt’s training officer. “We are applying that same standard to fast cruise to ensure that we can complete any mission the Navy asks of us.”

Following the fast cruise the USS Theodore Roosevelt will commence underway training and carrier qualifications to support the air wing’s return to operational readiness. This will include conducting carrier qualifications for the flight-deck crew, including jet take offs and landings. After this is concluded, which will take about two weeks, the ship will return to Guam and pick up healthy sailors who have finished quarantine and return to sea.

However, while underway the ship will leave those sailors behind that are not required for the evaluations. This precautionary move will enable the ship to conduct training at sea while the rest of the crew can support the recovery of the crew who remain in quarantine or isolation.

One setback has been that as of Monday, 14 sailors had tested positive for the coronavirus a second time, resulting in 30 other sailors who came into contact with them also sent ashore for quarantine. All 14 of those sailors had previously tested positive and been isolated for at least two weeks. This is why before sailors are allowed to return to duty they must test negative twice in a row—with the tests separated by at least a day or two.

The USS Theodore Roosevelt is the Navy’s fourth Nimitz-class aircraft carrier with a crew of nearly 5,000 sailors who support and conduct air operations at sea. She was launched in 1984 and is the fourth ship named to honor President Theodore Roosevelt.