The U.S. Navy is Getting a New (Tiny) Torpedo 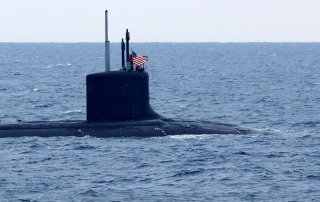 Like its predecessors, the Very Lightweight Torpedo will likely be powered by the Stored Chemical Energy Propulsion System (SCEPS). The SCEPS propulsion system was first authorized for use by the Navy in 1992. SCEPS is a chemical reaction that essentially immerses a piece of lithium in a sulfur hexafluoride bath. This chemical reaction creates an enormous amount of heat, which in turn generates steam for propulsion.

One of the United States’ standard torpedoes, the Mark 48, is 21 inches in diameter and weighs around 3,500 pounds, making it a heavy-weight. They were upgraded in 2016 by Lockheed Martin and equipped with a new propulsion system to make them quieter, given better resistance to jamming and other electronic anti-torpedo countermeasures, and given greater range. Despite the extensive upgrades, the torpedoes aren’t getting any younger, and were first introduced into U.S. Naval service in the early 1970s.

Though the VLWT’s exact specifications are not known, it is based on the Navy’s previous CVLWT which is considerably smaller than the Mark 48, or any other 21-inch torpedo for that matter. At 6.5 inches in diameter is easily dwarfed by the Mark 48 in both size and weight, and weighs a mere 220 or so pounds.

Given the VLWT’s small dimensions, submarines could carry a much greater weapon load out. It’s likely that surface ships will also be equipped with the VLWT. The VLWT’s small size indicates its role may be primarily as a torpedo intercept munition, rather than an offensive weapon, as its low weight and warhead size would be very limited against larger vessels like aircraft carriers or enemy submarines. It could become a potent air-dropped weapon against smaller surface vessels or potentially submarines though thanks to its light weight. An anti-submarine helicopter could in theory carry nearly 16 VLWTs in place of one Mark 48 torpedo.

Given the small size, VLWTs could also be used as a submarine launched mobile mine, or SLMM. SLMMs are essentially torpedoes that can be launched and propelled to remote locations. In places with high ocean traffic, like shipping lanes, SLMMs can lie in wait and be used to restrict traffic during a conflict scenario.

Whatever its future role, the Very Lightweight Torpedo will soon be coming to a submarine near you.