The U.S. Navy is Going All In On Drones. Will Russia Follow Suit? 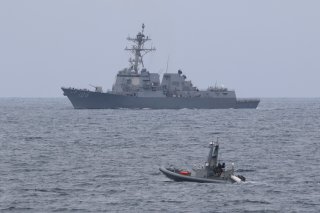 The Russian Navy may be adapting its strategies and tactics to pursue a large fleet of underwater, surface, and air drones, a technical development that changes the paradigm for maritime warfare.

Perhaps Russia’s Naval force, while not likely to truly rival the U.S. Navy except perhaps undersea, is pursuing a maritime warfare transformation somewhat analogous to what is happening with the U.S. Navy.

It certainly would make sense that the U.S. Navy’s drone explosion, involving the rapid addition of a new fleet of unmanned vessels both on and below the surface, could be mirrored elsewhere around the world as unmanned technology both rapidly advances and proliferates.

The U.S. Navy is, for example, transforming its tactical maritime warfare approach to disperse better, in part through the use of an expansive, yet highly networked fleet of unmanned vessels.  Large-deck amphibious assault ships, for example, will increasingly operate as command and control “motherships” operating large numbers of unmanned systems. Unmanned systems themselves will also further operate autonomously and in coordination with one another, as evidenced by the Navy’s progress with its Ghost Fleet project wherein fleets of Unmanned Surface Vessels autonomously operate in tandem with one another to share data, analyze incoming sensor information and solve certain tactical problems, all while humans remain in a command and control capacity. These kinds of concepts form the basis of the Navy’s Distributed Maritime Operations strategy. This approach is, for example, part of why the Navy is fast-tracking so many new undersea drones and unmanned surface ships and building new expeditionary platforms such as the emerging Light Amphibious Warship.

Could Russia be doing something similar?  A report in Russia’s TASS seems to suggest that might be the case.  The report quotes the CEO of the Krylov State Research Center, Oleg Savchenko explaining that greater use of drones in maritime war could help counter precision weapons and hypersonic missiles.

"On the one hand, future ships may be relieved of some traditional means of covering the situation, while on the other hand robots will become inalienable attributes of ships of different class. There will be unmanned aerial vehicles and autonomous uninhabited underwater vessels, including those capable of operating in a swarm," Savchenko said, in the TASS report.

Savchenko reportedly made a key reference to the manner in which drone vessels increase endurance, a key fact as both surface and undersea drones are able in many instances to operate for months at a time with varying degrees of autonomy and information networking.