The U.S. Navy Is Going All-In on Hypersonic Missiles 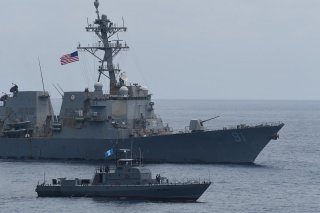 U.S. National security Adviser and former National Interest contributor Robert C. O’Brien (see our June panel discussion with him here) recently toured the Portsmouth Naval Shipyard in Maine, where he delivered remarks on the future of the U.S. Navy. “The Navy’s Conventional Prompt Strike program will provide hypersonic missile capability to hold targets at risk from longer ranges," O’Brien stated while at the shipyard. “This capability will be deployed first on our newer Virginia class submarines and the Zumwalt class destroyers. Eventually, all three flights of the Arleigh Burke-class destroyers will field this capability,” Defense News reported.

What Is Conventional Prompt Strike (CPS)

The CPS program aims to develop a hypersonic missile that could hit any target in the world in less than an hour. This hypersonic program is seen by many in the defense community as a crucial new capability, especially in light of recent Russian and Chinese advancements in hypersonics.

A Congressional Research Publication succinctly described the utility of the CPS program, stating that CPS “would not only allow the United States to pursue an adversary without relying on forward bases, it would also allow the United States to reach targets deep inside an enemy’s territory if that area were out of the range of U.S. forces deployed at bases or on naval forces in the region.”

Though the CPS missile would not be nuclear-armed, it would nonetheless provide a powerful deterrent capability due to the speed with which a warhead could be put on target and would be particularly potent during the opening minutes and hours of a conflict, especially against high-value targets. The missile’s payload, a hypersonic glide body, is said to be incredibly accurate as well, able to hit within six inches of its target location.

Integrating the missile onto the stealthy Zumwalt-class could prove to be a challenge too. The problematic class fired their first onboard missile just earlier this week, though their failed 155mm naval gun system may afford the large ships the necessary onboard space to accommodate large CPS missiles once removed.

Perhaps the only vessels in the Navy that could easily accommodate the missiles would be the large Virginia-class nuclear attack submarines, thanks to their larger length missile launch cells which could presumably accommodate the large-diameter hypersonic platform, although this is uncertain.

If the Navy's plan could be realized, it would bring a powerful new capability to bear, especially in the Pacific. Clearly, the Arleigh Burke-class stands to benefit, which though capable, is a somewhat aged ship design.

Time will tell what a CPS missile integration would look like and perhaps more importantly, how long it would take. Though some details are still unknown, don’t expect the retrofit to happen overnight. Watch this topic for further future information.