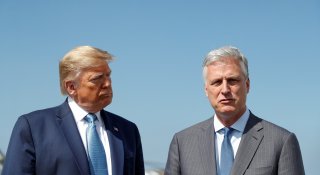 On June 30th, the Center for the National Interest held a webinar marking the 70th anniversary of the start of the Korean War (please see our special symposium on this topic with over fifty-plus perspectives here).

That virtual event addressed the war’s impact on the Korean Peninsula and the larger Asia-Pacific region. In addition, the panel discussed contemporary inter-Korean and U.S.-North Korean relations, including where they could be headed in the months and years to come. Here we present a video of that event:

The speakers at the event included:

• Panelist: LT. General Wallace Gregson (U.S. Marines, Retired), former Assistant Secretary of Defense; Senior Director, China and the Pacific Program at the Center for the National Interest; and former head of U.S. Marines in the Pacific.

• Panelist:​ Doug Bandow, Senior Fellow at the CATO Institute, and author of the book Tripwire: Korea and U.S. Foreign Policy in a Changed World.