The U.S. Navy Has a Serious Problem: Too Few Ships 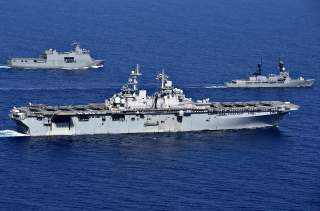 As the U.S. land wars in the Middle East fade into obscurity, Washington is slowly bracing itself for the naval age that will dominate the twenty-first century. Inherently a maritime nation, the future of America’s role in the world will be determined by its sea power. In light of China’s entrance into the global commons, no other military branch is flexible enough to respond to Beijing’s challenge and maintain the balance-of-power in the Indo-Pacific. But despite its unmatched technological superiority, the Navy has the numbers problem as a result of self-inflicted disarmament of the United States.

Due to perceived low-level maritime threats such as piracy and smuggling in the seas, the U.S. Navy was reduced dramatically in the aftermath of the Cold War. There were simply no great power competitors to challenge the American primacy in the seas. The Soviet Union was gone and the Russian navy came close to extinction. Former Secretary of Navy John Lehman’s six-hundred-ship Navy had prevailed over the adversary. As such, by 1998 the Navy had fallen to 350 ships from 592 (1989). Furthermore, the 2012 White House strategy called for decommissioning additional warships including several Ticonderoga-class cruisers. Then Secretary of Navy Ray Mabus justified the reduction citing the growing technological capabilities of American warships. In 2015, the U.S. Navy fell to 271 ships.

While the U.S. decommissioned its warships, Russia and China began their modernization programs. Before becoming a president, Vladimir Putin was actively involved in the council of navy in 1997. It’s been long speculated that Putin was behind Russia’s first president Boris Yeltsin’s decision to appoint Admiral Kuroyedov to save the sinking fleet. In 1999 Putin chaired the Russia Security Council meeting where he openly advocated for restoring the might of the navy hinting that Russia cannot be a great power without a potent naval force. He took this further as a president in 2000 by partaking in exercises of the Northern Fleet and spending the night aboard Delta IV SSBN. Pundits have qualified this move as a lobbying attempt by navy command to request funds to rebuild Typhoon SSBNs.

People’s Liberation Army Navy (PLAN) too is developing an increasingly mighty naval force. It is successfully consolidating its land borders aspiring to become a maritime power. According to some estimates by 2030 PLAN will be a blue-water navy exercising much influence beyond East China Sea, Yellow Sea, and South China Sea. In fact, PLAN’s increased presence in the Pacific and Indian oceans is a sign of China’s plan of a two-ocean navy.

Apart from mitigating their vulnerabilities in strategic choke points including the Strait of Malacca, the Chinese are building a navy to avoid historical scenarios of the past. For instance, when revealing the strategy of enhancing the Chinese seapower, Admiral Wu Shengli (former Commander of PLA Navy) referred to the demeaning events of the Century of Humiliation claiming the China was invaded by external powers 470 times from the seas. Moreover, the Chinese know that the lack of aircraft carriers has long been their Achilles heel. For example,  Imperial Japan initiated devastating strikes on Chinese mainland from carriers throughout 1930s. Similarly, following Taiwan’s first democratic elections, the United States deployed two carrier strike groups to tame Beijing’s provocative military drills to intimidate the Taiwanese. Therefore, the Chinese have adopted the American model of a carrier strike group with plans for five flattops by 2030–2035.

No less threatening development is the increased cohesion between Russia and China in the maritime domain. Both navies have exercised together since 2012. In 2016, the two nations held naval drills in South China Sea. The following year, their respective warships exercised in the Baltic Sea. There’s also an upcoming joint exercise in Asia as yet another example of growing Sino-Russian maritime comradery.

Additionally, despite ongoing backlash against globalization, international container shipping is here to stay. Seaborne trade is still the most efficient with more than fifty thousand merchant ships involved in global cargo transportation. Maritime trade is the cornerstone of the global commerce with 80 percent of international trade passing through the seas reaching to faraway ports.

With missions stretching from protecting the global commerce, deterring regional conflicts, and maintaining the balance-of-power in the most important region of the world, the U.S. Navy is going to need more ships. Granted, China is still behind the United States in terms of technological advantages of American warships. Moreover, the United States Navy is ahead with regard to tonnage, readiness of crews, and utilization of air power. However, even the most sophisticated ships don’t sail fast enough for region-to-region maneuverability leaving much room for other powers to fill the vacuum.

The stretched-too-thin state of the Navy will hinder its public diplomacy efforts as well. The naval visits to friendly nations not only increase America’s profile in the hosting country but provide a better understanding to U.S. sailors about the situation on the ground. Think of naval diplomacy as police officers engaging with local communities. Constant engagement is needed for mutual solidarity and sympathy.

The advantage of the U.S. Navy is in its ability to change perceptions, deter conflicts, and promote good governance while keeping the guns quiet.