The U.S. Navy Is Making Plans to Replace the F-35 Stealth Fighter 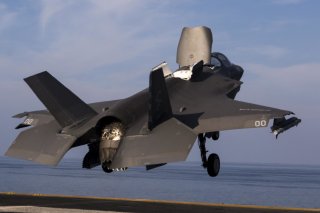 The Navy program, known as the Next-Generation Air Dominance (NGAD), has moved beyond a purely conceptual phase and begun exploration of prototype systems and airframes as it pursues a new fighter to emerge in 2030 and beyond.

Ongoing work has been weighing the advantages of leveraging nearer-term existing technologies such as new variants or upgrades to cutting edge weapons, sensors and stealth configurations—or allowing more time for leap-ahead developmental systems to emerge.

Within the last several years, the Navy has been building upon analysis written in a now completed Initial Capabilities Document. Interestingly, a February report from USNI news says the Navy’s 2021 budget seeks to cut back F/A-18 production in order to free up funds for its NGAD program. The Super Hornet cut, the story says, may re-route as much as $4 billion to the sixth-generation carrier-launched platform.

Anticipated decisions about a sixth-generation fighter jet balance themselves upon the as-of-yet unknown maturity of various promising new weapons and technologies nearing a threshold of operational possibility. For instance, some now-in-development next-generation stealth technologies, including new radar-evading configurations, coating materials and advanced thermal-signature reduction are fast-approaching levels of combat readiness. Yet, absent a clear timeframe when, for example, new stealth or artificial-intelligence-enabled sensors can ensure overmatch for decades to come, Navy developers are thinking it may make sense to push the current “art-of-the-possible” to the maximum extent.

This challenge, explored by a Naval Postgraduate School essay called “The 6th-Generation Quandry,” poses the question as to whether it might be equally if not more effective to postpone formal sixth-generation development until truly breakthrough advances emerge, while pursuing advanced variants of current, yet upgradable platforms in the interim.

According to this logic, there simply might not be enough of a margin of difference in performance between the best-upgraded platforms of today—and something entirely new which could be built in the next ten years or so.

Could these upgradable systems, fortified by new-iterations of stealth technology now being woven into the B-21, themselves be sufficient to propel naval aviation superiority for decades? This would alleviate the risk and expense of pursuing something truly “breakthrough” in the near term, potentially freeing up funding and resources to explore paradigm-changing air-fighter technologies for the long-term.

Furthermore, current sensors, avionics and weapons systems are increasingly artificial-intelligence-reliant, a circumstance which makes it easier to greatly improve performance by integrating new algorithms, analytics, or processing speed. In effect, all of this raises the question as to whether an entirely new airframe is truly needed to achieve overmatch in the coming decades? By 2030? Deliberations are ongoing.