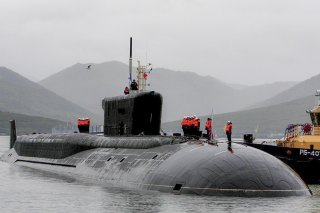 Just under a decade after it was first commissioned, the Kremlin’s new class of Borei nuclear ballistic missile submarines (SSBNs) is set to be publicly unveiled at Russia’s largest annual defense exhibition.

The Russian Navy’s Pacific Fleet announced late last week that the Borei-class SSBN will be displayed for the first time at this year’s ARMY 2021 military exhibition. “For the first time in the forum’s history, the Borei-class nuclear-powered strategic underwater cruiser is set to be presented to spectators in the Avacha Bay in the course of the materiel’s static show,” the Fleet’s press office said.

The Pacific Fleet did not immediately specify which Borei model will be shown; four Borei SSBNs are currently active in Russia’s Navy, of which two—K-550 Alexander Nevsky and K-551 Vladimir Monomakh—serve in the Pacific Fleet. The Navy plans to commission a total of ten Borei models through 2027.

The Borei SSBN class was conceived as a replacement to the aging Delta and Typhoon strategic submarine lines. Whereas other Russian submarines are iterations of decades-old Soviet hardware, the Borei class is based on an entirely new design concept.

The first three Borei submarines were built to the original Borei standard, while the remaining seven—from K-549 Knyaz Vladimir onwards—will be upgraded to the 955A (also known as Borei II) revision. The 955A update brings refreshed onboard electronics, minor efficiency tweaks to the hull design, more sophisticated weapons targeting protocols, quality-of-life improvements for the crew, and marginal gains in stealth performance.

The submarine displaces at twenty-four thousand tons submerged and can reach speeds of up to thirty-three knots, making it twice as light and markedly faster than its Typhoon-class predecessor. It also carries greater firepower, with as many as sixteen RSM-56 Bulava submarine-launched ballistic missiles (SLBMs). The Bulava missile boasts a maximum effective range of 8,500-10,000 kilometers, as well as a GLONASS-powered digital inertial navigation system, and can reportedly carry at least six and as many as ten MIRV warheads with a yield of up to 160 kilotons. There were some initial signs to suggest that the Bulava missiles were being developed as a submarine-launched variant of Russia’s land-based Topol-M ICBM, but the full extent of the missile’s technical lineage remains unclear.

The annual International Military and Technical Forum, alternatively known as ARMY, is Russia’s largest defense exhibition, having served for years as one of the Kremlin’s main platforms to advertise its latest military hardware to foreign buyers. The Pacific Fleet statement added that this year’s edition of ARMY will feature a raft of modernized coastal defense weapons. “The military and technical forum’s sites in the regional center will showcase 17 models of the coastal defense troops’ armaments, military and special hardware,” according to a statement. “Visitors will be able to view a T-80BV tank, a BTR-82A armored personnel carrier, Bastion, and Bal coastal defense missile launchers, an S-400 surface-to-air missile system, and a Pantsyr-S anti-aircraft missile/gun complex, as well as motor vehicles and equipment of the [1941-1945] Great Patriotic War.” The exhibition will be held from August 22–28 at the Patriot Congress and Exhibition Center, Kubinka Air Base, and Alabino military training grounds, all located in the broader Moscow region.