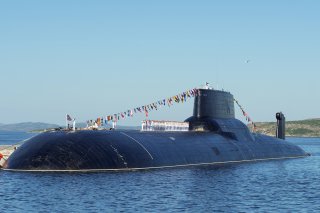 The sole remaining Typhoon-class submarine, Dmitry Donskoy, is set to receive a further lease on life.

A military insider source told TASS news yesterday that the Navy has no immediate plans to decommission Dmitry Donskoy, the lead vessel of the Project 941 Akula (NATO reporting name Typhoon) class of ballistic missile submarines. “There are military training events planned for 2021 involving the cruiser. Decommissioning of the submarine is an issue of five years, at least,” said the source.

Dmitry Donskoy, along with the remaining Delta IV and III submarines currently serving in the Russian Navy, is due to be phased out over the coming decades by the new Borei class of nuclear-powered strategic submarines. But it appears that Dmitry Donskoi, which is currently active with Russia’s Northern Fleet, will not be among the first on the chopping block.

Dmitri Donskoy was laid down in 1976. It was the largest military submarine in the world—a title more recently contested, at least in length if not in displacement, by the Belgorod special purpose submarine. The Typhoon vessels boasted a slew of forward-looking features. Built in part from a premium titanium construction and multiple pressure hulls, Project 941 vessels are hardy enough to surface directly through ice. They can also take a punch, with the multihull system protecting the crew and core internal components from certain types of breaches. They were armed with as many as twenty R-39 Rif submarine-launched ballistic missiles (SLBMs), as well as six 533-millimeter torpedo tubes for self-defense.

As with a great chunk of the Soviet Navy, Dmitri Donskoy endured years of technical neglect during the decade following the Soviet collapse. It was only in the early to mid-2000s that it was repaired, refitted, and given a new role as a testbed for Russia’s latest RSM-56 Bulava SLBMs. The Bulava missiles are intended as the flagship SLBM platform for the Borei submarine line, replacing the R-39 missiles previously carried by the Typhoon class. Dmitri Donskoy conducted a slew of successful Bulava tests from 2005 to 2010; it is widely believed that the Bulava nuclear-tipped missiles, which have an operating range of up to ten thousand kilometers and are guided by a GLONASS-powered digital inertial navigation system, formally entered service in 2018.

The Navy’s plans for Dmitri Donskoy remain unclear. There was some speculation in prior years that Dmitri Donskoy could be converted into a cruise missile carrier armed with P-800 Oniks, Zircon, or Kalibr missiles, but those proposals appear increasingly unlikely. It could be that the submarine will be used to test future Bulava variants or different missiles altogether, as well as other prototype technologies that may find their way onto the Borei line. Of the ten planned Borei submarines, eight were laid down and four are currently serving in the Russian navy. The rest of the Borei line is expected to enter service by the late 2030s.