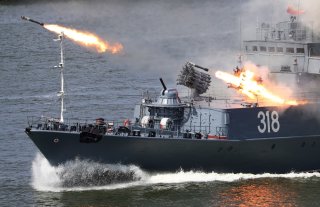 According to Russia’s TASS news agency, the Russian Navy is now operating its new Otvet anti-submarine missile system. This next-generation ship-launched anti-submarine weapon, which functions with a torpedo-like ability to fly parallel to the surface, submerge, and use sonar to track and destroy submarines, is creating concern about whether the U.S. Navy’s undersea advantage can be sustained.

TASS cites some specs for the weapon to include being launched from 3S-14 multi-purpose launchers used for Russian Kalibr, Oniks, and Tsirkon cruise missiles.

“The Otvet missile’s warhead section comprises a small-size homing anti-submarine torpedo. Upon reaching the target area, the missile parachutes a torpedo into the water, then it submerges and automatically hunts down an enemy submarine, using its sonar system,” the TASS report says.

This weapon’s specs raise questions about its range and guidance systems, as U.S. destroyers fire torpedoes from helicopters. Using helicopters seems to make sense in terms of range, angle of attack, and expanded surface area surveillance and attack. Air-launched U.S. Navy torpedoes can launch from MH-60R helicopters and also drop sonobuoys to hunt for submarines.

U.S. Navy ships do, however, also fire torpedoes from Mk 32 launchers on cruisers and destroyers.

While it may not be clear if the new Russian torpedo can also fire from helicopters or other air assets, the TASS article explains it may launch from the same launcher as a Tsirkon Tomahawk-like cruise missile.  Reportedly, the Otvet anti-submarine missile launched in the Sea of Japan and successfully destroyed an underwater target.

However, while particulars about submarines’ torpedo countermeasures are not likely to be available for security reasons, both U.S. attack and nuclear-armed submarines are engineered with advanced quieting technologies and could, for instance, use overhead or even undersea drones to detect an enemy launch.  Some of the very-often publicly discussed submarine torpedo defenses include decoys and some acoustic countermeasures. For example, a submarine could fire off objects which emit an acoustic signature to divert an incoming torpedo away from the submarine itself and instead force it to hit a decoy.

Russia’s Otvet missile system has a range of 40km and may soon be doubled.

“The Russian Navy plans to outfit most of its surface combatants with the Otvet anti-submarine missile system, including the heavy nuclear-powered missile cruiser Admiral Nakhimov,” TASS said.

Yet questions abound about the new system’s true capabilities and effects. Does the new Russian surface-launched torpedo incorporate a new generation of targeting technologies such that it could overcome or at least challenge the U.S. Navy’s state of the art defenses? Furthermore, a weapon fired from a ship launcher might have to travel farther than a torpedo launched from a forward-positioned helicopter, giving submarine commanders more time to react. Are U.S. submarines fast enough to quickly exit a threat area? Precise enough with multi-domain surveillance to detect a launch early in its flight path? Are they sufficiently armed with cutting edge countermeasures to elude the weapon? The answers to these questions will likely determine the extent to which U.S. Navy submarines can sustain their undersea advantage, something of great consequence in high-threat areas such as the Black Sea.