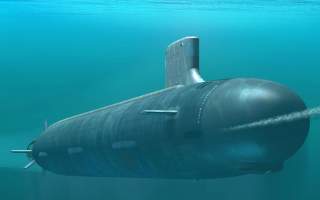 A former employee of Huntington Ingalls Industries, the Virginia-based shipbuilder that helps to construct all of the U.S. Navy’s submarines, has sued the company in federal court, claiming that the firm lied about problems with the external coating on Virginia-class attack subs.

Ari Lawrence, a former HII engineer, claimed he was fired for raising his concerns about the “anechoic” hull coating, which adheres to a submarine’s metal hull and helps to absorb sound waves, thus minimizing the vessel’s sonar signature.

Virginia-class subs since at least 2006 have suffered problems with their coatings. Official photos have depicted submarines entering and leaving port with noticeable gaps in their coatings, implying that chunks of the sound-absorbing material had peeled off.

Naval consultant Craig Hooper weighed in with comments to Daily Press. “It’s one of these things where it seems deceptively simple,” Hooper said of the coatings. “But it has a lot of variables.”

Losing sound-absorbing materials is a common problem for operators of deep-diving submarines, Forbes reported. “Submarines are made out of immensely strong steel, but when they go deep the water pressure makes their hulls flex and change shape.”

This places the adhesive behind the coating under immense strains. Add to this the long patrols, unforgiving salt water, rust and temperature changes involved and you have one of the most challenging operating environments on earth. So when you next see a submarine with tiles missing and rust stains, it may tell you more about the way it is being used than the maintenance standards of its owners.

Some British submarines suffer similar problems. The Russian navy is often slow to replace tiles that have fallen off. Some Russian submarines, such as the Sierra-class attack boats, have titanium hulls, which seems to make the problem even worse. Sierra-class vessels have been sailing around for years with the same patches of missing tiles on the outside. These patches are so reliable that they can be used to identify the individual submarine.

But spare a moment for the submariners of the Iranian navy. When Iran imported Kilo-class submarines from Russia in the 1990s, they came with an anechoic covering. Iran’s drive for self-sufficiency has resulted in the submarines being maintained locally. Evidently the shipbuilding industry has a challenge reproducing the rubber tiles. They are often seen sailing around with most of the tiles removed, leaving a very uneven surface. This may actually increase the noise signature of the submarine.

Where older submarines have brick-like, sound-absorbing anechoic tiles, Virginia-class subs feature a coating that shipyard workers apply in large sections. “It creates a smoother surface and was thought to be cheaper, faster and more durable,” Daily Press explained.

But it was apparent more than a decade ago that the Virginia’s coatings were peeling off during operations. The Virginias are on track to become the most numerous type of submarine in the U.S. Navy’s roughly 50-strong undersea fleet.

Lawrence claimed the shipbuilder lied to cover up the flaws in the Virginias’ coatings. The cover-up endangers American sailors’ lives, Lawrence asserted.

Hooper took a sanguine view. “As it has been explained to me, the failure of anechoic coating is not the end of the world — one can operate at slower speeds to reduce banging or flapping,” he said.

But in a major war with Russia or China, American subs would need every advantage they can get, Hooper added. And the Navy and HII have had plenty of time to fix the problem.

“If this issue was detected in 2006 [or] ‘07, it’s been more than a decade,” Hooper said. “We have sunk billions into the Virginia class, and it is high time the Virginia-class subs met or exceeded their original performance objectives.