The U.S. Navy Is Teaching An Old Missile Some New (And Deadly) Tricks 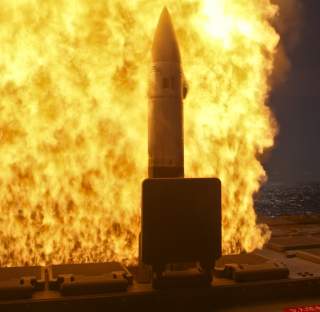 This is where the SM-2 Block IIIC comes in. The upgrade substitutes the legacy semi-active radar homing system for the SM-6 active seeker while leaving intact the other aspects of the SM-2 airframe. This produces a medium-range missile that can be fired against targets using tactical data supplied from off-board sensors fitted with the Navy's new Cooperative Engagement Capability, whether fixed radars ashore or the E-2D Hawkeye airborne early warning aircraft embarked aboard U.S. carriers.

The SM-2 Block IIIC upgrade is a program that has largely flown “under the radar” of press attention for the past few months. This lack of popular scrutiny belies the profound operational significance of this initiative for the U.S. Navy’s surface fleet.

The RIM-66 Standard Missile 2-Medium Range has long been the staple of U.S. naval air defense against enemy aircraft and guided missiles. The current versions in the fleet, the SM-2 Block IIIA and Block IIIB, possess a range of approximately ninety nautical miles, giving Aegis surface combatants a broad-area anti-air capability to protect other forces under their umbrella.

For guidance, the SM-2 uses semi-active radar homing, a method in which the firing ship uses its tracking radar to acquire the target, and a narrower beam emitted by the ship’s trainable illuminator to “paint” the target with a radar signal that an airborne SM-2 can follow. Semi-active radar homing was state of the art when Aegis ships were first designed and built during the late Cold War. At the time, the ratio between computing power and space/weight was lower than it is today, leading designers to reserve the heavier active sensors (the radar) for shipboard use, instead placing lighter, passive sensors on the missile itself, thereby reducing weight and increasing range.

However, the SM-2’s guidance system has grown into a dangerous tactical liability in today’s operating environment. First, ships only have a fixed number of illuminators—Arleigh Burke-class destroyers have three, and Ticonderoga-class cruisers have four—limiting the number of missiles that can be guided onto a target at any given time. Second, with the proliferation of what U.S. Naval War College Professor James Holmes refers to as “land-based seapower,” the inherent stealth of blue-water naval forces—that is, their diminutive size relative to the vast areas of open ocean where they can hide—is at a premium.

With effective targeting, long-range anti-ship missiles can now hit U.S. surface ships from hundreds of miles away—and emissions from shipboard radars can give an adversary an effective targeting solution where they might not have had one before. Accordingly, it is increasingly imperative for U.S. ships to operate under “emissions control,” powering down shipboard radars to reduce their electromagnetic signature. With the legacy SM-2’s guidance system, U.S. ships would have to compromise this posture in order to open fire, giving the adversary valuable electronic intelligence as to the composition and position of U.S. forces.

On the one hand, the U.S. Navy has developed two new surface-to-air missiles; the longer-ranged multimission SM-6 and the short-ranged, quad-packable Evolved Sea Sparrow Missile (ESSM), that leverage computing advances to use small onboard radars for terminal guidance. But on the other hand, SM-2s are in such abundance in fleet stocks and magazines that it will be economically difficult to replace them outright with the more capable but more expensive SM-6.

This is where the SM-2 Block IIIC comes in. The upgrade substitutes the legacy semi-active radar homing system for the SM-6 active seeker while leaving intact the other aspects of the SM-2 airframe. This produces a medium-range missile that can be fired against targets using tactical data supplied from off-board sensors fitted with the Navy's new Cooperative Engagement Capability, whether fixed radars ashore or the E-2D Hawkeye airborne early warning aircraft embarked aboard U.S. carriers.

With the resulting new capabilities from the SM-6’s sophisticated guidance system, U.S. surface ships will be able to use SM-2s to conduct offensive strikes against enemy aircraft and surface ships out to ninety nautical miles while simultaneously remaining at emissions control and preserving their limited stock of SM-6s for more distant or challenging targets. While the ideal solution for medium-range air defense would be a lengthened, extended range ESSM, or “ESSM-ER,”—which would quadruple magazine capacity by packing four missiles into a single VLS cell—the SM-2 Block IIIC is an excellent interim solution that will leverage the Navy’s existing inventory to improve combat capability at low cost.

Hunter Stires is a Fellow at the John B. Hattendorf Center for Maritime Historical Research and a Freelance Contributor to the National Interest. He is recently the co-author of “China is Waging a Maritime Insurgency in the South China Sea. It’s Time for the United States to Counter It.” He tweets at @HunterStires.