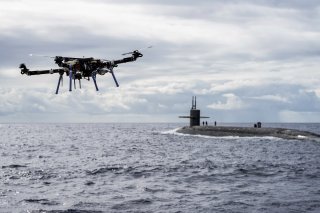 The U.S. Navy is looking for new technologies able to engineer new, small, submarine-launched aerial drones able to find targets miles away and relay back targeting information on enemy ships, submarines, aircraft or other kinds of hostile activity.

Naval Sea Systems Command is asking industry for proposals and ideas to build a Submarine Launched Unmanned Aerial System with a “3-inch diameter form factor.”  The request asks that the mini-drone “provide sensor, communication and cyber-security capabilities. The integrated system should be capable of launch from the U.S. submarine fleet’s 3-inch Signal System Ejector equipment,” the NAVSEA announcement states.

Such small drones, which could potentially launch as a mini-group, might take off from an attack or ballistic missile submarine once it surfaces from undersea missions or perhaps even as it lingers slightly below the surface.

How might such an application, which the NAVSEA statements say is only a consideration at this point, impact maritime warfare tactics?

Other emerging requirements, according to the NAVSEA statement, stipulate that the vehicle should remain airborne for at least one hour, operate at ranges out to the line-of-sight radio horizon, and use a variable bandwidth encrypted data link with at least 256-bit encryption strength.

While any kind of exact range for the new drone has yet-to-be-specified, there are a number of industry players capable of engineering such a system of varying ranges, depending upon engine fuel-efficiency, propulsion technologies and sensor form factor. EO/IR sensor cameras are fast increasing in fidelity and range, a technical trajectory that means smaller and smaller drones will operate with an ability to cover wide swaths of territory.

This technical maturation also means that mini-drones will, to a much larger degree, be computer-enabled and potentially even directed by AI. Levels of computer and mini-drone swarm autonomy are fast improving, paving the way forward for massive amounts of increased drone-to-drone communication, data sharing, and manned-unmanned teaming. Perhaps a group of small, sub-launched drones will be able to pass targeting information to one another and even cue air and ground assets as well. They could be programmed to operate in tandem with one another and adjust to new targeting information or obstacles as they emerge.

This clearly seems to be a goal, according to the Navy statement which also calls for an “ability to operate in an emission-controlled environment and operate without constant radio communication links.”

Image from U.S. Navy: An unmanned aerial vehicle delivers a payload to the ballistic missile submarine USS Henry M. Jackson around the Hawaiian Islands, Oct. 19, 2020, during an event designed to test and evaluate the tactics, techniques and procedures of U.S. Strategic Command's expeditionary logistics and enhance the readiness of strategic forces.