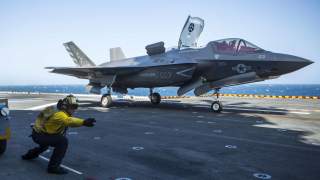 How can the U.S. Navy buy more ships and planes when it can’t maintain the ones it has?

“The Navy continues to struggle with rebuilding the readiness of the existing fleet due to enduring maintenance and manning challenges,” the report finds. “As the Navy seeks to expand its fleet by 25 percent, these challenges will likely be further exacerbated and the Navy will likely face additional affordability challenges.”

Auditors point to seven problems that GAO, Congress’s watchdog agency, have highlighted over the past several years, but which have yet to solved:

After a series of embarrassing collisions at sea in 2017, which led to fears that Navy has forgotten basic ship-handling skills, training was revamped along with fewer waivers for required training. Still, “while the Navy has demonstrated its commitment to ensuring that crews are certified prior to deploying, training for amphibious operations and higher-level collective training may not be fully implemented for several years.”

Between 2012 and 2018, only 30 percent of maintenance was completed on schedule. In particular, most Navy attack submarines have suffered maintenance delays. The backlog is caused by insufficient capacity in public shipyards as well as shortages of shipyard workers.

In 2017, GAO concluded that the Navy was underestimating how many sailors were needed to man ships, leading to undersized crews and overworked sailors. The Navy says it is aiming for surface ships based overseas to have a minimum of 95 percent of their complement, but GAO auditors who interviewed crews in Japan were told that “the Navy’s methods for tracking fit and fill do not account for sailor experience and may be inaccurately capturing the actual presence of sailors onboard and available for duty on its ships. Moreover, sailors consistently told us that ship workload has not decreased, and it is still extremely challenging to complete all required workload while getting enough sleep.”

The Navy wants to boost the number of ships by 25 percent, and is planning to buy 301 new ships between now and 2048 as well as extending the life of older destroyers and submarines. But GAO and the Congressional Budget Office have calculated that the Navy “has consistently and significantly underestimated the cost and timeframes for delivering new ships to the fleet. For example, the Navy estimates that buying the new ships specified in the fiscal year 2019 plan would cost $631 billion over 30 years while the Congressional Budget Office has estimated that those new ships would cost $801 billion—a difference of 27 percent.”

Numerous aircraft models across the Navy, Air Force and Marine Corps have been plagued by low availability rates due to aging aircraft, lack of spare parts for older planes, and too few mechanics.

The shortage of Marine Corps fighter pilots quadrupled to 24 percent between 2006 and 2017, while the Navy has been scrambling to fill pilot vacancies. “Further compounding their pilot shortages, we also found that the services have not recently reevaluated squadron requirements to reflect an increased fighter pilot workload,” said GAO. “As a result, the reported shortage actually could be greater.”

The Navy must fix the teething troubles of a new and complicated aircraft that lacks sufficient spare parts: in 2017, only 15 percent of Marine F-35Bs were rated fully mission-capable. “The Navy and the Marine Corps may have to decide whether they are willing to accept less reliable and maintainable aircraft than originally planned,” GAO warned.