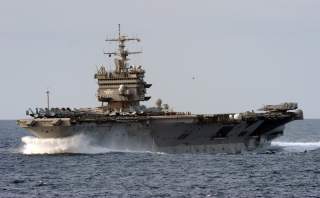 The U.S. Navy is struggling to grow its fleet of aircraft carriers.

In December 2016, then-Navy secretary Ray Mabus announced a new force-structure goal for the U.S. fleet. Under Mabus's plan, the sailing branch would expand from around 280 front-line warships to 355 in order to better compete with the growing Chinese navy.

The larger fleet would include 12 large aircraft carriers, up from 11 in the fleet in 2019. China commissioned its first carrier in 2012 and commision its second flattop in 2019. A third Chinese carrier is under construction in Shanghai.

The Trump administration largely has stuck with Mabus's plan, and slowly has boosted the Navy's shipbuilding accounts. But a new report from the Congressional Research Service throws cold water on the prospects for 12 carriers.

According to the CRS, it might take the Navy until the 2060s to stabilize the carrier fleet at a dozen vessels. Even that might be optimistic.

When the Cold War ended, the Navy steadily cut the flattop fleet to a low of 10 vessels in late December 2017. This despite a 2006 law requiring the Navy to maintain 12 carriers. A 2007 amendment to that policy allowed the fleet to drop down to 11 carriers. The dip to 10 flattops lasted just eight months before a new, 11th carrier commissioned into service in the summer of 2017.

The Navy's only hope to sustainably boost the carrier fleet and avoid the 2048 dip to nine flattops is to consistently spend billions dollars more than it currently plans to spend as part of the build-up that Mabus originally proposed.

But even the Mabus plan could be optimistic. Mabus explained that his plan didn't take into account budget caps that Congress voted into law in 2011 amid a slow recovery from the 2008 recession and a legislative squabble with then-president Barack Obama.

There will be another recession. And American politics aren't likely to get less contentious. The extra billions of dollars the Navy assumes it annually will get from Congress over the next five decades might not be forthcoming.

In that case, a sustainable build-up to 12-carrier fleet could prove impossible over any timeframe.

David Axe serves as Defense Editor of the National Interest. He is the author of the graphic novels  War Fix, War Is Boring  and Machete Squad.

This Is How America Plans to Sink China's Warships