The U.S. Navy's Triton Drone Is Getting Geared Up 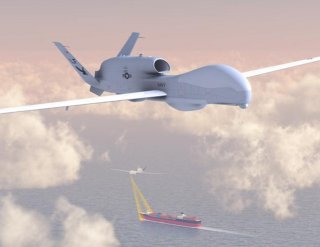 Despite the Navy’s current “procurement pause” regarding the MQ-4C Triton maritime warfare drone, the ongoing upgrades to the platform may point to service plans to configure the drone for major combat on the ocean, and possibly even fire weapons.

The Navy is now working extensively on a new “Multi-Intelligence” gathering capability for the Triton and a host of other upgrades to include collision avoidance technology and targeting-specific enhancements.

“FY22 continues the MQ-4C procurement pause that will focus efforts on the development of the Multi-Intelligence capability to achieve an Initial Operational Capability in FY23,” Navy spokeswoman Courtney Callaghan told The National Interest.

While long-term plans often evolve and are subject to change, the technological enhancements to the Triton would appear to indicate a strong Navy resolve to add more Tritons in the future and sustain the platform for decades. This may reflect upon a growing realization that, despite being larger and “less-stealthy” per se, a Triton drone can draw upon evolving technologies and specific attributes to massively enhance its operational impact and greatly strengthen its survivability should it be needed against a technologically advanced great power adversary.

Advancements with sensor range and image fidelity, for instance, can now enable medium-sized and larger drones to operate with massively improved imaging precision, something which makes it possible for a Triton to effectively perform missions at much higher altitudes and therefore less detectable to enemy fire. Also, command and control upgrades, such as those now being focused upon by the Navy, can increase secure networking capacity for the drone such that it can operate in a surface-air kind of multi-domain capacity and quickly exchange time-sensitive data with other drones, surface ships and even fighter jets and bombers.

Many of these developments seem to indicate that larger, less-stealthy drones like the Triton, while perhaps initially thought of as primarily suited for an uncontested environment, are being adapted, upgraded, and improved to function in a dangerous, contested, high-end combat scenario. The Navy is clear to avoid saying the Triton will be an armed drone. However, the rapid integration of new targeting technology may open avenues in that direction. While the Triton already does substantial targeting missions, newer innovations are enhancing its capacity to track targets, relay information, and even attack. It certainly does seem clear that, given command and control, targeting and ISR technical advances, a drone like the Triton may be positioned to add unique value to future warfare in ways that might not have been anticipated.

Clearly, the intent here seems to be to improve the combat mission envelope for the Navy Triton by, among other things, enhancing its ability to track and instantly transmit target details to “shooters” or “effectors” in position to strike. The Triton already performs extensive long-range surveillance missions, yet newer targeting efforts appear to potentially take the speed, efficiency, processing power, and command and control targeting functionality to a new level, perhaps with a specific mind to more fully evolving the Triton as a major warfare platform.

This is quite significant because it seems to indicate that the Navy sees a crucial continued role for the Triton, alongside the service’s concurrent work on smaller, stealthier drones and dispersed, yet highly networked platforms. Smaller drones may not have the endurance capacity to cover vast distances in places like the Pacific. They may not be able to operate with as large or as capable a sensor payload and may therefore be less precise when it comes to targeting applications. While well-suited for closer attack, stealthy drones may have a limited fuel-carrying capacity given that they need to retain a stealthy configuration. Larger fuel tanks can of course impact the size, shape, and potential detectability of a platform, making it operate with fewer stealthy attributes. This being said, it's not a foregone conclusion that something like a Triton would necessarily be highly detectable in some respects, given its ability to use range, altitude, and endurance to elude enemy sensors. It might also make sense to consider that a Triton, while larger than smaller drone swarms or less-stealthy than other platforms, is perhaps much more advantageous and survivable for attacking forces than a large, manned, fixed-wing surveillance plane likely to be seen and shot down and likely limited to lower altitudes.

It certainly seems possible to arm a drone like the Triton, given existing technologies and fast-emerging new ones. Perhaps, if controlled by a human decisionmaker much like an MQ-9 Reaper, a Triton could carry its own mobile arsenal of firepower to a certain extent. This may impact range. However, with the ability of Inverse Synthetic Aperture Radar to find, track and follow moving maritime targets, and then quickly network the target data, a Triton could attack enemy ships or even coastal targets at less detectable stand-off ranges. Having an organic or built-in arms capability for the Triton would massively shorten the sensor-to-shooter curve and enable the drone to make rapid strikes when high-value targets emerge. Maybe it could even attack an enemy submarine should it come close to the surface to communicate.

What might it fire? Quite a question. It could fire Hellfire missiles, perhaps Maverick air-to-ground missiles, or even air-to-air weapons such as the AIM-9X now being configured for the Reaper.