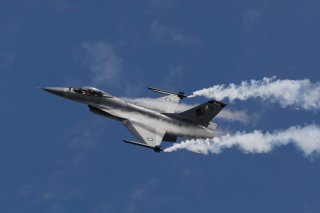 In a reversal of a decision made by the Trump administration, the White House announced on Wednesday that it had approved a proposed $450 million arms package involving the upkeep of F-16 fighter jets within the Pakistani Air Force.

The Defense Security Cooperation Agency, a branch of the Defense Department charged with overseeing foreign arms transfers, submitted a report to Congress on Wednesday outlining the terms of the sale and communicating the approval of the Defense Department and the State Department. The agency’s statement indicated that the package would sustain Pakistan’s ability to use the aircraft as part of counterterrorism efforts.

“The proposed sale will continue the sustainment of Pakistan’s F-16 fleet, which greatly improves Pakistan’s ability to support counterterrorism operations through its robust air-to-ground capability,” the DSCA report read. “Pakistan will have no difficulty absorbing these articles and services into its armed forces.” It also noted that the package would support the Pakistani Air Force’s interoperability with the United States and would not significantly affect the balance of power in Asia or adversely affect the United States’ security.

The package marks the first major U.S. defense sale to Pakistan since 2018, when former President Donald Trump abruptly announced a halt to all foreign aid and arms sales to the country following allegations that Islamabad had not acted in good faith during its multi-decade counterterror campaign against Al Qaeda and other Islamist militant groups.

On Wednesday, however, the State Department struck a more conciliatory tone, claiming in a statement that Islamabad had been “an important counterterrorism partner”—justifying Washington’s provision of “life cycle maintenance and sustainment packages for U.S.-origin platforms” as “part of longstanding policy.”

“Pakistan’s F-16 program is an important part of the broader United States-Pakistan bilateral relationship,” the statement continued. “The proposed sale will sustain Pakistan’s capability to meet current and future counterterrorism threats by maintaining its F-16 fleet. The F-16 fleet allows Pakistan to support counterterrorism operations and we expect Pakistan to take sustained action against all terrorist groups.”

The proposed $450 million sale does not include any new capabilities, weapons, or munitions, according to the DSCA’s report. The package was requested by the Pakistani government, which has in recent years sought to consolidate and coordinate sustainment and maintenance efforts towards its pre-existing F-16 fleet.