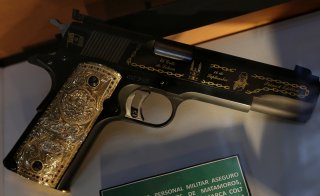 It was last August when the Mexican government announced it was suing ten prominent American-based gun manufacturers, alleging that the gun manufacturers are to blame for the devastating bloodshed south of the border. The Mexican Foreign Affairs Ministry claimed that 70 percent of the firearms used by the cartels were found to have come from the United States. The filing said that at least 17,000 homicides in 2019 were linked to trafficked weapons.

This month the Mexican government received some support from the attorneys general of thirteen American states and Washington, DC. In a brief filed in federal court in Massachusetts, the Democratic attorneys general—which include those in California, Massachusetts, Minnesota, and New York—have argued against the defendants' motion to dismiss the case, and stated that the federal law providing legal protection to gun manufacturers does not apply, CNN reported.

"While the law may grant firearms manufacturers some protection, it is not a free pass to knowingly allow their products to land in dangerous hands," California attorney general Rob Bonta said in a statement Tuesday. The group takes particular aim at the Protection of Lawful Commerce in Arms Act (PLCAA), which protects gun manufacturers from being held liable if their products are used in a crime.

Mexico is seeking $10 billion in damages.

What was notable is that last week, Massachusetts attorney general Maura Healey, via a press release, asked the court to acknowledge that gun manufacturers, dealers, and distributors can be held accountable for how their products are marketed or sold. "It is unacceptable for gun manufacturers and distributors to knowingly market their products in a way that facilitates the illegal trafficking of weapons into the hands of dangerous individuals," Healey stated.

Until last year, Smith & Wesson was headquartered in Massachusetts, while AR-style weapons have already been long banned in the Bay State. Healey's support for the Mexico-led lawsuit could almost be seen as retribution for the company pulling up stakes and moving to Tennessee.

The defendants had previously called for the case to be dismissed. In a statement, the National Shooting Sports Foundation (NSSF), a firearms industry trade group, suggested the lawsuit and its targets were also misplaced. "The Mexican government should focus on bringing the Mexican drug cartels to justice in Mexican courtrooms," said NSSF senior vice president and general counsel Lawrence G. Keane, "not filing a baseless lawsuit in an American court to deflect attention from its disgraceful and corrupt failure to protect its citizens."

In addition, according to a recent report from investigative journalist Carlos Loret De Mola, the Mexican Army routinely "loses" about 30 percent of the firearms it purchases from the United States. Despite this, instead of accepting any responsibility for the problem, Mexican lawmakers have tried to cast blame on the guns that are illegally trafficked into their country.