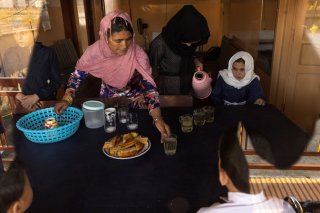 However, the move is sure to be controversial within the United States, as it would likely involve some portion of the funds passing into the hands of the Taliban, which seized control of Afghanistan in August.

White House spokeswoman Emily Horne argued that the U.S. Agency for International Development, or USAID, would retain control over how the funds were spent and would ensure that they provided for everyday Afghans. Horne emphasized that the aid would go toward emergency needs such as food, water, and basic health services for rural Afghans.

Afghanistan’s economy has greatly declined since the U.S. withdrawal and subsequent Taliban takeover. The prior Afghan government received more than 70 percent of its funding from international aid. Without that foreign support, the Taliban-led government has been unable to pay the salaries of public workers. As winter has set in and supply chains have failed, food prices throughout the country have increased by as much as 20 percent.

The International Rescue Committee (IRC) also announced that it had observed cases of measles, an exceptionally rare illness in the West, in Afghanistan’s southern and eastern Khost and Herat provinces. The IRC stated that this underlines the precarious nature of Afghanistan’s health services and the lack of widespread access to basic vaccines.

Representatives from USAID also called on the Taliban to allow its “aid workers, especially women … to operate independently and securely” within the country.

“The United States continues to urge the Taliban to allow unhindered humanitarian access, safe conditions for humanitarians, independent provision of assistance to all vulnerable people, and freedom of movement for aid workers of all genders,” a statement released by USAID read.

Altogether, the Biden administration has put $780 million toward humanitarian assistance in Afghanistan since August. The Taliban-led government has also pressured the United States to release another $10 billion in funds belonging to the previous government that is being held within American banks.