The Taliban Claims It Can’t Pay for Food 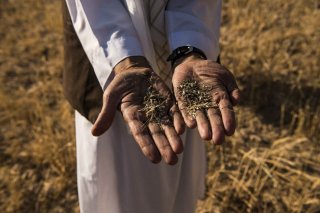 The Taliban takeover of Afghanistan, which concluded in August after the militant group seized control over Kabul, took many Western observers by surprise. It has also precipitated concerns about the nation’s future access to needed goods, such as food supplies from abroad.

Prior to the previous government’s collapse, roughly eighty percent of its annual budget was supplied by the United States and its partners. These funds paid for the government’s administration, military, and police, but they also provided for essential services like hospitals, clinics, and the importation of food and medicine.

While the United States has stressed that it intends to continue delivering aid to the Afghan people, it, along with other Western governments, has balked at doing so in a way that would allow the Taliban to benefit. Along these lines, it has already cut off the new government’s access to Afghanistan’s finances in the United States.

The Taliban are thought to have access to funds from their heavy involvement in Afghanistan’s drug trade, as well as cash that the group seized from the previous government, and it was hoped that these funds could help to cover the cost of importing essential goods. However, the interim government has pleaded poverty, insisting that it does not have the necessary funds to pay import taxes on food shipped to a port in Pakistan, according to the vice-chairman of Afghanistan’s Chamber of Commerce and Industry.

Afghanistan’s banks are also cut off from the international banking system, making it difficult to bring in funds for emergency relief, according to reporting from the remaining NGOs and international organizations still present in the country.

An unnamed public health non-profit organization, for instance, relied on funding from the World Bank and the European Union to purchase food and fuel for the country’s hospital system. The group’s $600 million in funds was cut off following the Taliban takeover, meaning that hospitals are having difficulty feeding their patients and operating medical equipment during power cuts.

International donors have continued to line up for Afghanistan’s urgent needs; a United Nations appeal this week netted the country a promised $1.2 billion in emergency relief aid. However, the problem of aiding the people of Afghanistan without funding the Taliban-controlled government continues. The United States has requested that humanitarian groups deliver food directly to Afghans, rather than sending funds into the country.

As a justification for withholding funding, American officials have pointed to Afghanistan’s interim government, which excludes women and some of Afghanistan’s ethnic minorities from power—and, moreover, includes a wanted terrorist with a $5 million bounty on his head.

Trevor Fileth is a current and foreign affairs writer for the National Interest.