USS Gerald Ford Loads Up With 500,000 Pounds of Ordnance 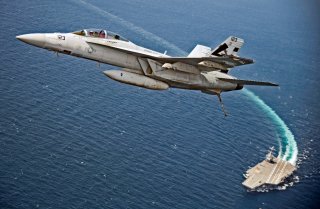 In an April 11 statement, the U.S. Navy explained that more than 400 sailors transported over 200 pallets of ammunition from “the flight deck and hangar bay,” before loading them into the ship’s magazines by using the carrier's weapons elevators.

“We on-loaded both live and training ammunitions to help support Carrier Air Wing 8 and our security forces on board for this underway,” said Lt. Cmdr. Paul Castillo, from San Diego, Ford’s Ordnance Handling Officer.

“Every carrier needs ammunition to complete the mission. There is nothing we can’t do when we have a fully loaded ship.”

The U.S. Navy statement explained that the ammunition on-loading is essential for the Ford’s eventual carrier qualifications and integration with the rest of its accompanying strike group.

“It feels good because we get to show what [the] weapons department really does. We spent a lot of time and hard work to get to this point and it payed [sic] off,” said Aviation Ordnanceman 1st Class Hitcho said.

“Getting the entire department together as a group was great, everybody was excited and ready to go. Everybody was in the right place at the right time, it was a small part of a bigger picture.”

The Navy added that ammunition onloading, while underway at sea, is crucial for keeping the carrier’s air wing supplied with the ordnance it would need to carry out strikes from the carrier.

Though the announcement might seem mundane, it represented a great success for the aircraft carrier.

The USS Gerald R. Ford is the lead ship of the Gerald R. Ford-class, the U.S. Navy’s newest and most technologically advanced aircraft carrier to date. The carrier’s design features several significant improvements over the previous Nimitz-class carriers.

Though both classes are nuclear-powered, the Ford’s reactors provide greater electrical output. The new carriers rely on electrical systems to a greater extent than their predecessors, and the extra output will allow the class to operate directed-energy weapons in the future.

Another Ford-class improvement is the carrier’s electromagnetic aircraft launch system which replaces the legacy steam-powered catapults. Though the system offers a higher launch and recovery rate than the previous system, the catapults have been somewhat problematic.

However, perhaps most importantly, the Ford has clearly demonstrated that its weapons elevators actually work.

The new weapons elevators transport ammunition and aircraft throughout the belly of the carrier between its multiple below-deck spaces. Though the elevators were supposed to shuttle material between decks more quickly and carry a greater load, the eleven elevators were still experiencing problems as late as last year.