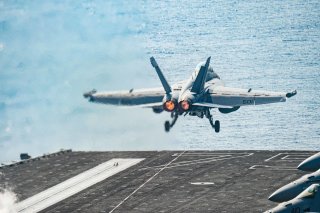 This week the United States Navy announced that the USS Harry S. Truman Carrier Strike Group (CSG) will remain at sea off the East Coast of the United States, despite the fact that it has completed its most recent deployment. This is part of an effort to keep the crew healthy from the COVID-19 pandemic and remain combat-ready to take on missions if needed.

The strike group has conducted two deployments in a row without any major maintenance period, but the Truman CSG remains the only on-call strike group on the East Coast.

"The ship is entering a period in which it needs to be ready to respond and deploy at any time," Vice Adm. Andrew Lewis, commander of the 2nd Fleet, said in a prepared statement as reported by Stars & Stripes. "Normally we can do that pierside, but in the face of [the coronavirus pandemic], we need to protect our most valuable asset, our people, by keeping the ship out to sea."

This extended deployment may not be welcome news to all crew members, as many had departed Norfolk in September for a deployment to the Persian Gulf region. That deployment was the carrier's third overseas cruise in just the past four years. As of Tuesday, it had been 43 days since the strike group stopped in a port.

"After completing a successful deployment we would love nothing more than to be reunited with our friends and families," said Rear Adm. Andrew Loiselle, commander of CSG-8. "We recognize that these are unique circumstances and the responsible thing to do is to ensure we are able to answer our nation's call while ensuring the health and safety of our Sailors. We thank you for your continued love and support as we remain focused on this important mission."

USS Harry S. Truman (CVN-75) is the eighth Nimitz-class aircraft carrier of the United States Navy and is the flagship of CSG-8. It began operations in the U.S. 5th Fleet in December. In addition to the strike group's carrier namesake, CSG-8 is made up of Arleigh Burke-class guided-missile destroyers USS Lassen (DDG-82), USS Farragut (DDG-99) and USS Forrest Sherman (DDG-98), and Ticonderoga-class guided-missile cruiser USS Normandy (CG-60).

Navy officials have said they expect to update the crew and family members of the evolving situation in the next three weeks.

The decision to keep the strike group at sea followed Monday's announcement that a sailor from the aircraft carrier USS Theodore Roosevelt (CVN-71) had died from complications related to COVID-19. That carrier remains in port in Guam as its crew continues to address a breakout of coronavirus. As of this past Sunday, 585 sailors have tested positive for COVID-19 and nearly 4,000 sailors have been moved ashore in Guam, while 800 remain aboard to maintain the ship's critical systems and sanitize the carrier.

"We mourn the loss of the Sailor from USS Theodore Roosevelt who died today, and we stand alongside their family, loved ones, and shipmates as they grieve," Chief of Naval Operations Adm. Mike Gilday said as reported by Navy Times. "This is a great loss for the ship and for our Navy. My deepest sympathy goes out the family, and we pledge our full support to the ship and crew as they continue their fight against the coronavirus. While our ships, submarines and aircraft are made of steel, Sailors are the real strength of our Navy."