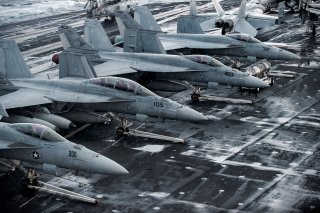 "Conducting enhanced Air Policing from North Aegean waters further illustrates NATO's continued ability to share and pool existing capabilities," said Rear Adm. Curt Renshaw, commander, Carrier Strike Group Eight, in a press release. "We set out to prove that this dynamic employment of an Aircraft Carrier­in pretty restrictive waters­could be done, and in doing so, we have demonstrated the enduring U.S. commitment to Allies."

NATO has nearly doubled the number of military combat aircraft on alert across Europe following Russia's unprovoked invasion of Ukraine. One fear is that Russian aircraft flying in international airspace could escalate the conflict.

Aircraft from the Harry S. Truman had been conducting increased sorties even before Moscow launched its invasion two weeks ago. Strike Fighter Squadrons 11, 34, 81, and 211, and Electronic Attack Squadron 137 kicked off a variety of missions, including NATO enhanced air policing, to bolster the security alliance in late February, a 6th Fleet spokesperson told Navy Times this week.

The airborne patrols commenced Feb. 24 and are ongoing. Those missions come on the heels of training that the carrier aircraft conducted with the Romanian air force. American aircrew and their maintainers were hosted at Borcea-Fetesti Airfield from Feb. 8 to 15.

Hourigan added that the missions illustrate how the air wing and Truman are partnering with NATO allies to "defend territorial integrity."

The strike group is on a scheduled deployment in the U.S. Sixth Fleet area of operations in support of naval operations to maintain maritime stability and security, and defend U.S., allied and partner interests in Europe and Africa.

"The Truman and Carrier Air Wing One sailed into the northern Aegean Sea conducting fixed-wing flight operations to support NATO's enhanced Air Policing mission, demonstrating our ability to operate dynamically throughout the theater," said Capt. Gavin Duff, Truman's commanding officer, in a press release. "This team performed flawlessly as we continued to send a clear signal of our ironclad commitment to NATO."