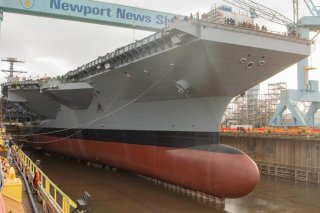 The U.S. Navy’s second Ford-class aircraft carrier, the USS Kennedy (CVN 79), has reached a new milestone and is surging toward operational status alongside the USS Gerald R. Ford (CVN 78).

According to a recent statement from Huntington Ingalls Industries (HII) shipbuilders, after many years of construction, workers have now installed more than 9.8 million feet of cable (over 1,800 miles) on the Kennedy and have turned over the 1,000th compartment to the crew. This will permit the Kennedy’s sailors to access the ship for training purposes while construction and testing are ongoing elsewhere onboard the ship.

HII ship developers have been employing a new construction strategy for the Kennedy, including a handful of techniques intended to lower costs and incorporate lessons learned from the building of the first Ford-class carrier, the USS Gerald R. Ford.

With so much of the ship built, hundreds of structural units have been completed on items such as pipe assemblies, cabling, shafts, rudders, and struts for the ship.

This technique, referred to by HII developers as “modular construction,” was also used when building the Ford; the process welds smaller sections of the ship together into larger structural “superlift” units before being lifted into the dry dock, HII statements explained.

Construction begins on the bottom of the ship and works up with inner-bottoms and side shells before moving to box units, HII explains. Also, some of the design methods now used for the Kennedy include efforts to fabricate or forge some parts of the ship—instead of casting them—because it makes the process less expensive.

As for the design, the Kennedy will be largely similar to the Ford’s design, with a few minor alterations. The Kennedy will receive a new radar and its aircraft elevators will use electric motors instead of a hydraulic system to reduce costs.

The new radar, called the Enterprise Air Surveillance Radar, or EASR, is slated to be installed on the now-under-construction Kennedy, as well as several of the service's amphibious ships, such as the LX(R) amphibious warfare ship and its third big-deck America-class amphibious assault ship, LHA 8.