The USS Ronald Reagan Is Back in the South China Sea, and China Isn't Happy 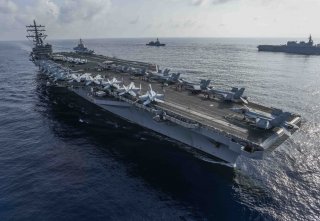 In April 1985, then-President Ronald Reagan traveled to China for a diplomatic meeting with Chinese president Li Xiannian. The trip marked the third time a U.S. president had traveled to China since President Richard Nixon's historic trip in 1972. Reagan's trip was meant to highlight his administration's desire to improve diplomacy between the two nations.

Now thirty seven and a half years later, the USS Ronald Reagan Carrier Strike Group (CSG-5) has made its second deployment to the South China Sea this year as part of an effort to maintain a highly visible U.S. presence in the politically charged region.

CSG-5 entered the South China Sea on Sept. 24, just weeks after Beijing instituted new maritime regulations that demanded all vessels transiting the waters report course and destination to the Chinese authorities. China now considers nearly the entirety of the South China Sea to be its national waters.

While in the neutral waters, CSG-5 has been conducting fixed and rotary-wing flight operations, maritime strike exercises, anti-submarine operations, and coordinated tactical training.

"We look forward to leveraging our recent out-of-area experience as we return to the South China Sea and our rapidly growing alliances and partnerships dedicated to the Indo-Pacific," said Rear Adm. Will Pennington, commander, Task Force 70, Carrier Strike Group (CSG) 5.

"The deployment of Ronald Reagan carrier strike group to the Middle East and rapid seamless return to the Pacific highlight the flexibility and responsiveness of a premier maritime force and the power and reach of global coalitions dedicated to the stability provided by international law and rules based order," Rear Adm. Pennington added.

The strike group will also work with its network of partners and alliances to ensure maritime security and a free flow of commerce in the Indo-Pacific, the Navy announced.

"Ronald Reagan and all components of its strike group have operated with relentless energy and commitment throughout the deployment, showcasing the strength and resilience of America," added Capt. Fred Goldhammer, Ronald Reagan's commanding officer (CO). "As we continue our mission in the South China Sea, we remain vigilant and ready to answer the call."

The carrier strike group includes the Navy's only forward-deployed aircraft carrier USS Ronald Reagan (CVN 76), the embarked Carrier Air Wing (CVW) 5, and embarked staffs of Task Force 70 and Destroyer Squadron (DESRON) 15, as well as the Ticonderoga-class guided-missile cruiser USS Shiloh (CG 67). CSG-5 is forward-deployed to the U.S. 7th Fleet area of operations in support of a free and open Indo-Pacific region. The fleet conducts forward-deployed naval operations in support of U.S. national interests in the Indo-Pacific area of operations and as the largest orward-deplyed fleet, it interacts with thirty-five other maritime nations to build partnerships that foster maritime security, promote stability, and prevent conflict.

Earlier this month, the 7th Fleet conducted a series of exercises in the South China Sea. In addition, the U.S. Navy's Arliegh Burke-class destroyer USS Benfold (DDG-65) transited the South China Sea and sailed within twelve miles of Mischief Reef, a portion of the Spratly Islands, which China has asserted are within its territorial waters and subject to its new maritime rules.

Beijing has condemned the U.S. actions and called the deployment of the warship to be an act of aggression, while the U.S. Navy has said the destroyer was conducting routine underway operations and maintaining freedom of navigation.