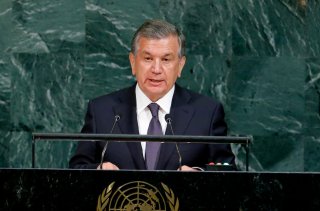 President Shavkat Mirziyoyev of Uzbekistan urged an end to the ongoing protests in the country’s northwestern Karakalpakstan region on Monday, claiming that the initial protests had given way to “destructive actions” and riots and caused casualties among both demonstrators and Uzbek security forces.

“Unfortunately, there are fatalities among civilians and law enforcement officers,” Mirziyoyev claimed in a video shared on the Uzbek press service’s Telegram channel. The president did not provide further information on the number of people killed or injured, although Sultanbek Ziyayev, the health minister of the Karakalpakstan region, claimed that “thousands” of people had been hospitalized from injuries during clashes with security forces in Nukus, Karakalpakstan’s capital. The precise casualty toll from the protests has been difficult to determine, due in part to the government’s declaration of a state of emergency over the weekend, which sharply restricted freedom of movement in the region.

Mirziyoyev’s comments were published the day after the Uzbek leader visited Nukus, his second visit to Karakalpakstan since the onset of the protests. During his visit, he argued that a group of agitators had “won the trust of citizens, misled them, disobeyed the lawful demands of the authorities, caused chaos, and tried to seize the buildings of local government bodies,” including the Department of Internal Affairs and the city’s National Guard armory.

The protests in Karakalpakstan began last week after the Uzbek central government in Tashkent circulated a series of draft changes to the country’s constitution. Among other changes, the proposed language would have removed Karakalpakstan’s nominal “sovereignty” and its ability to secede from Uzbekistan with majority support in a referendum—two caveats that were essential in maintaining unity within the Central Asian country following its independence from the Soviet Union in 1991. In a move intended to calm the protests, Mirziyoyev’s administration confirmed over the weekend that the offending language had been removed from consideration, guaranteeing Karakalpakstan’s continued autonomy.

Karakalpakstan continues to operate its own parliament and can veto any laws concerning it passed in Tashkent. However, the Karakalpak ethnic group comprises only around two percent of Uzbekistan’s total population and only around one-third of the population within Karakalpakstan, following years of Uzbek immigration and Karakalpak emigration—a demographic shift that has led to lingering tensions in the region.

Although protests in Uzbekistan are not unheard of, they are relatively uncommon in the country, which is usually regarded as an authoritarian state with powerful police and security forces and few legal avenues for dissent.