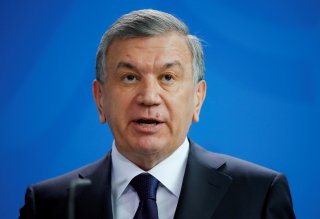 President Shavkat Mirziyoyev of Uzbekistan was re-elected to a second five-year term on Sunday in a political contest that was marked by a lack of significant competition and allegations of voter fraud—despite recent electoral reforms.

Mirziyoyev won with roughly 80 percent of the vote, according to the nation’s Central Election Commission (CEC), which reported voter turnout of 80.8 percent.

In accepting the results, the president struck a conciliatory tone, saying that he was grateful to the country for choosing him to continue and pledging to continue to work with the country’s parliament to enact change. Mirziyoyev is a member of the Uzbekistan Liberal Democratic Party (Ozlidep), which holds a plurality in the nation’s parliament.

The chairman of the CEC, Zayniddin Nizamkhodjaev, claimed that the contest was free and fair and had adhered to international standards.

Observers from the Organization for Security and Cooperation in Europe (OSCE), however, disputed this characterization, arguing that Uzbekistan’s political landscape was not a “genuinely pluralistic environment.”

“While multiple candidates contested the election,” a report released by the group stated, “there was no meaningful engagement with each other or with voters, and candidates refrained from challenging or criticizing the incumbent.”

The report noted that recent liberal political reforms the country’s leadership had undertaken and praised the work of the CEC. It said the CEC “conducted its work professionally and efficiently.”

In the election, independent candidates were not allowed to enter. Instead, each of the country’s five political parties submitted a candidate. However, the four competing candidates largely refrained from campaigning and sent substitutes to attend the country’s televised political debates. Mirziyoyev’s campaign also faced scrutiny from the OSCE for failing to clearly distinguish his public presidential duties from his candidacy.

In spite of the OSCE’s doubts, Mirziyoyev’s landslide victory will lead him to continue the country’s economic liberalization, which resulted in rapid GDP growth prior to the onset of the COVID-19 pandemic. He is also likely to continue relaxing the strict political and religious restrictions imposed by his predecessor, Islam Karimov, and to pursue good relations with both Russia and the West.

In a telling sign of their close ties, Russian President Vladimir Putin was the first foreign leader to call Mirziyoyev, congratulating him on his victory before the results were officially announced.